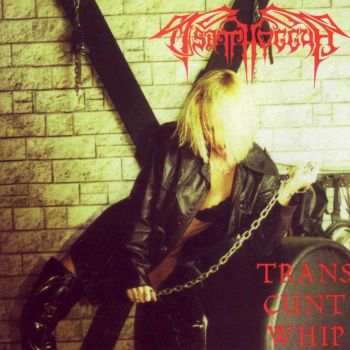 Every scene needs its clowns and Germany, as we know, has rarely been shy about presenting some fools to the world. Early Backwater, late Running Wild, do you need more? Probably not, but Tsatthoggua didn't care. They spawned half an hour of music twice (or rather what they thought was music). Already the self-chosen style description "Satanic Sado Maso Hyperspeed Metal" was quite extroverted, plus the embarrassing bitch on the cover. Consider yourself fortunate if you don't know the pictures in the booklet.

M-A describes the style of the combo as black / thrash. To be honest, that's not entirely wrong, but it's not right either. The dark vibrations of black metal are missing and jagged thrash riffs are also conspicuous by their absence. At least, the vocals of "North Wind" (a name you definitely have to remember.... little joke) are not unlike the performances of other singers from (true) black metal bands. Fans of Grabak would have to appreciate this North Wind. Also, so much justice must be done, the music is not really bad. The last piece, for example, could come from the Marduk repertoire, at least the beginning. The quintet tries to create a high intensity over the entire 33 minutes, but this approach unfortunately wears out quickly. In the absence of outstanding riffs and melodies, I often have the feeling that I am listening to a hoover gone wild. This is rather averagely exciting for me, who only moderately enjoys house cleaning.

The hoover association is not least due to the production. Especially in the "hyperspeed" passages everything clumps together. Well, Tsatthoggua don't give the impression of being interested in subtleties, but the guys could have shown a little more attention to detail. Be that as it may, compositionally the band fails to leave any lasting scent marks. The album blasts along the listener, more black than thrashy.

You have to hand it to the clowns that they weren't worried about commercial success or - if they were - then at least completely unsuitable. The record moves far away from any marketing strategy. Given this situation, they barrel along the highway of somehow blackened noise, always willing to hide their sometimes good guitar work (“Iä O Tsatthoggua”) under thick layers of pretty expressionless noise. That's a pity, because with a little more concentration on music instead of noise, the band could certainly have uncovered some good approaches and thereby scored points. Finally, I could write something about the lyrics, but that would probably make as little sense as the "poetry" itself presented here. This mix of wild, anti-Christian insults, stupidly naive glorification of drugs and adolescent bondage fantasies devalues itself. Yes, Tsatthoggua took their mission as clowns very seriously. Too bad that the development of their musical potential fell by the wayside. No wonder the hammer fell after only two albums.