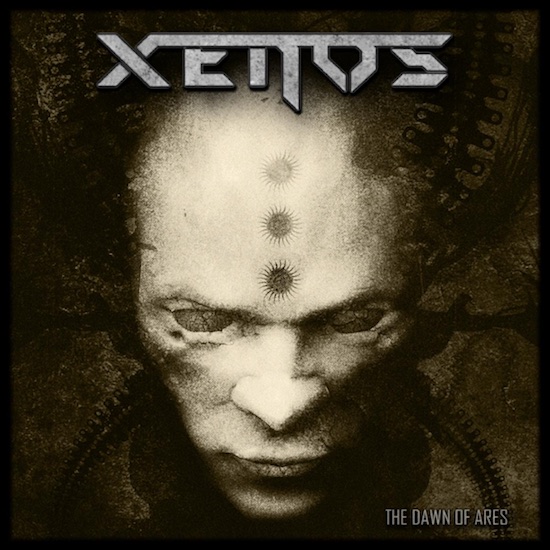 Type: Full-Length
Release Date: June 25th, 2021
Label: Iron Shield Records
Genre: Thrash
1 I Am The Machine
2 All Shall Fall
3 The Dawn Of Ares
4 Circle Of Lies
5 Shields
6 Interceptors
7 The Prophet
8 Still To The Front
9 The Healer
MetalBite on YouTube

Shrill sirens accompany the first guitar tones of The Dawn Of Ares. They ensure that I am wide awake right from the beginning. And that’s good, because the opener is interesting. It holds some typical elements, for example sawing guitars and pretty aggressive vocals. On the other hand, the Italians feel free to show their individuality. It’s not that stereotyped high-velocity opener that many other thrashers prefer. Instead, I am listening to a quite casual song that spreads rather unusual vibes. A courageous beginning, no doubt about it.

Speaking of courage, I must mention the excessive title track. It illustrates that Xenos do not intend to go back in time. Their form of thrash sounds rather modern than retro. I hear my inner voice: you don’t like modern thrash. That’s correct, but the fairly bulky and sometimes machine gun-like staccato celebrating riffs of Xenos are simply effective. Even an initially slightly disturbing break does not have a negative impact on this song which neither falls victim to incoherent structure nor to repetitiveness.

Sometimes I miss a higher portion of ferocity. This element is almost completely missing. Or am I wrong? Maybe songs like 'Still To The Front' have a subliminal cruelty. The song, equipped with an insistent chorus, is slowly marching forward like a wounded soldier on the way to his final battle. The dry, clear and well-balanced sound underlines the sharp-edged approach of the Italians who do not set the focus on the velocity. They prefer to demonstrate their musical skills and do not shy away from both harsh and relatively soft melodic fragments. Sometimes their way of riffing reminds me of Necrodeath, but maybe this legend just comes to my mind in view of the origin of Xenos. However, even if one finds trace elements of the legendary quartet in Xenos’ sound, one thing is for sure: the individual approach that already shapes the opener characterizes the entire album.

Ares is the god of war in Greek mythology and perhaps the album is not aptly titled, because Xenos do not provide a bloody thrash metal massacre. Yet they offer many good, mid-harsh thrashers and only a few parts, for example the beginning of 'Shields', fall by the wayside. However, the positive aspects of the album clearly have the upper hand. Certainly, just like all of their competitors, Xenos will not revolutionize the genre. But they have found a previously empty niche for their kind of thrash and that’s remarkable. In combination with very solid songwriting skills, the album guarantees those thrash fans a good time who do not think that everything was said and done after the end of the genre’s first wave.