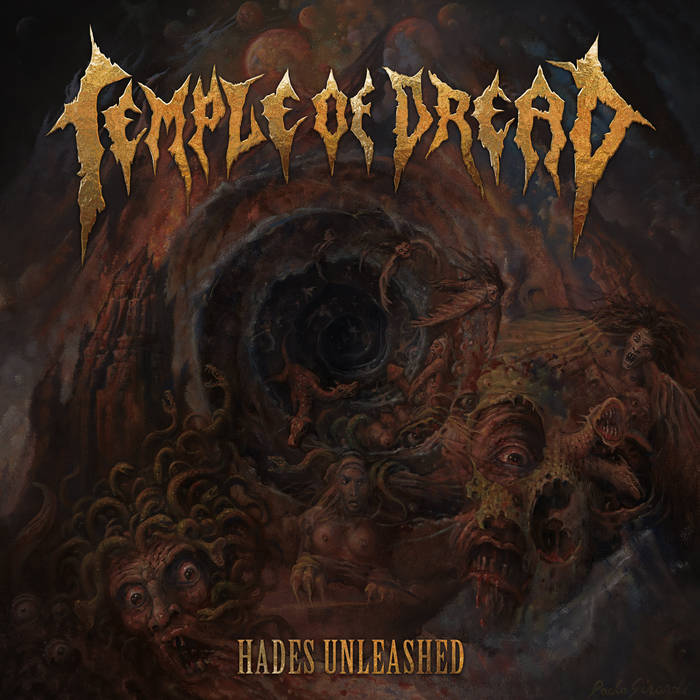 That was fast. After last year's sophomore album World Sacrifice, the three Frisians (to quote Nis Randers) are back with their third album Hades Unleashed. On one hand, you are happy when a band you like to listen to releases another album so quickly, but on the other hand, such a quick fix can also backfire. Let's see how it behaves in this case.

First of all, let's take a look at the cover. This was designed by Paolo Girardi and does not foretell anything good. Agony, torment, horror, gloomy atmosphere - the first 'plus' point is here already.

Musically, it starts directly with 'Aithon's Hunger'. A few drumbeats without any banter move into fast drums, hectic riffs and brutal vocals - but without drifting into chaos. 'Necromanteion' is a very catchy song that starts pretty groovy and stays that way despite some faster interludes. The riffing reminds me of Death during their "Leprosy" phase. Pretty casual spoken word parts are used and the guitar solo in the middle of the song is a "bow" to Iron Maiden. 'Wrath Of The Gods (Furor Divinus)' starts with a teutonic thrash riff á la "Endless Pain", only to turn into a brute death metal piece right away. Death's ("Spiritual Healing") also comes to my mind as a reference. 'Threefold Agony' is a very catchy mid-tempo stomper that invites you to take a breath in order to be ready for 'Empyrean'. Full brute force of the band comes out again here; a fast song with impressive, dramatic riffs and firing drums which can be as well said about the following track 'Crypt Of The Gorgon', which comes across a bit punky from the rhythm of it. 'Nefarious, I' starts Celtic Frost-like (even a Uuugh!!! can be heard) and it is pretty noticeable that the band uses slightly disharmonic sounds (Voivod says hello....) but that can be heard in 'Aithon's Hunger' already. The final track is 'Procession To Tartarus', which starts slowly creeping in with mantra chanting and sounds quite vicious due to its doomy instrumentation. I don't want to keep coming up with any band comparisons, but I'm reminded of Celtic Frost here also and once in a while and in the further course of good old Bolt Thrower. Very cool!

My conclusion is that Temple Of Dread have created a pretty strong album that in my eyes (ears) is a bit more aggressive and uncompromising than its predecessor. The tracks are more complex and hateful and also Jen's voice sounds angrier than before. The disc was produced at Soundlodge Studio by drummer Jörg Uken, who has also worked for Anvil, Sinister, God Dethroned, Obscenity or Slaughterday, among others. There are no failures to complain in here, superb job as a producer and as a musician!!! If the next album will again be such a big hit I just like to say "hurry up"!!!