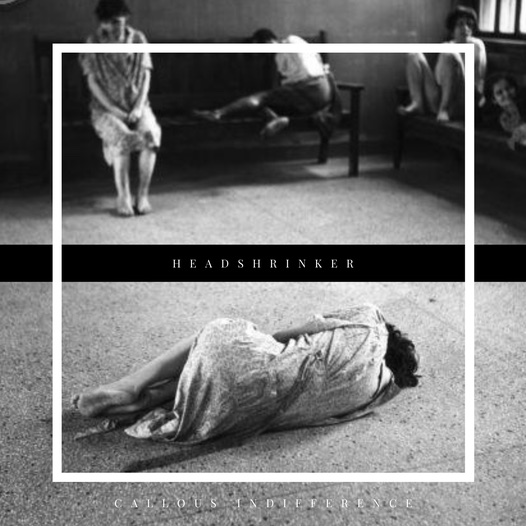 Formed from the collective minds of 3 previous members of Polyptych and previous drummer from Havok, here comes forth Headshrinker, with a self-released album that fans of Tomb Mold and Pyrrhon will enjoy in all its maelstrom of chaos.

Wasting no second in bursting itself out, the album begins with 'The Burn Of Indifference', which serves as the perfect opening for this album. While it all may sound pretty straightforward at first, it progressively becomes more menacing and chaotic, with many twists and turns in tempo and structure. From here on, everything ramps up from there with varying intensity and speed, but always keeping a kind of slithering menace in the sound. Some tracks are more upbeat, others are more doom-ish and many others are all in-between.

The guitars are very well executed, with lots of (dis)harmonies everywhere and some really heavy riffs. Bass has a very thick sound that complements these intertwined dissonant guitars. Drums pack a real punch in every track without having to resort to extensive overuse of blast-beats, but rather mid-paced thash-like beats and some more doom-ish drumming in later tracks, delivering some great fills throughout.

Thrown here and there in various tracks are atmospherics segments of clean guitars that add some more variety to the overall record. Vocals are okay for the style in particular. Very low but legible growls that sometimes are mixed with high-pitched shrieks. Maybe the weakest point for me are the vocals as they aren't really exceptional, but they get the job done. Speaking in general of the sound, it is ok with every instrument noticeable, although the guitars do sound “thinner” to me than what I expected.

Despite these minor complaints it is a good record overall and, if you are a fan of Pyrrhon, Deathspell Omega, Tomb Mold and similar artists, it is worth to check out. It may not bring extreme metal to new, unexplored grounds but it will quench your thirst for dissonant extreme metal with atmospherics abundant.

To be released August 27th independently by the band.