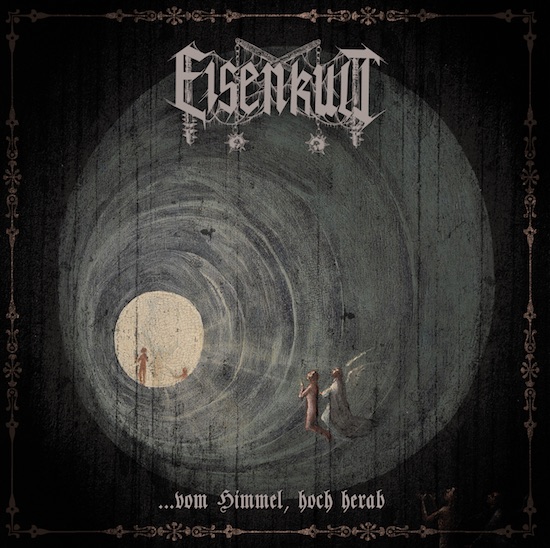 I have no certain knowledge about this, but I think Eisenkult are sponsored by grandpa and grandma. Of course, they must not know what vicious types their grandchildren are. That's why the three deceitful henchmen have written 'Einklang' and 'Ausklang', two sterile keyboard-only numbers that must be considered a clinical form of chamber music. "Listen, grandpa, what a lovely sound. Grandma, come here, enjoy the beautiful harmonies." Grandma and Grandpa liked it and two minutes later, the nasty trio was rewarded and could invest the next 100 Euros in the band. The end justifies the means.

Eisenkult's second album has eight fully-fledged tracks to offer between the above-mentioned pieces. Yes, I also include 'Wie Es Dröhnt Und Wie Es Schallt'. Apart from sacral keyboards, there are only polyphonic vocals spreading anti-religious propaganda, but this devil's prayer has inner strength, atmosphere and a remarkably vicious determination. You see, Eisenkult certainly know how to make use of the keyboards. Therefore, it is no coincidence that the album's outstanding track is a mixture of metallic infamy and supporting synthetics. 'Brutal Und Furchtlos Stumpf' (a song with this name has probably never existed in 2020 years of human history) bundles all the band's strengths. An outstanding chorus thanks to a highly effective, almost primitive melody, rapid speed alternating with dignified stepping rhythms, an ingeniously nasty voice and morbid lyrics form a pearl of German sound art. For those who want to know a little more concretely what the band sounds like, please refer to the line-up of Eisenkult. The participation of the Meuchelmord mastermind leaves its mark and Mavorim, also represented in the trio, do not sound completely different. In other words, Eisenkult sound pure, energetic and ugly, even in their melodic moments.

The longer I listen to Vom Himmel, Hoch Herab, the more I like it. The hateful and sometimes disgusting lyrics lend the music some Eisregen vibes, but after all, Eisenkult drive on their own highway. 'Totenglocke' scores with a great melody and fine tempo shifts that cover the whole range of velocity. The band anthem 'Eisenkult' convinces with sheer brutality. The title track surprises with a few clear lines and sporadically it sounds like a mean version of In Extremo without bagpipes. However, not only its fast-paced sections are fantastic, and the keyboards add a great melody.

In short, Eisenkult have a clear vision of how their music should sound. They are thus on their way to becoming the next Kulteisen (cult iron) from Germany. Maybe their label, Purity Through Fire, should take a leaf out of their book. They (or the printer they commissioned) seem to be confused. In the CD booklet, the lyrics of some songs are printed twice, others not at all. There are worse things, and we have a sense of humor, but it's still a pity, because this careless handling of the packaging doesn't do justice to the music. Anyone with such a talent for combining black metal compatible melodies, frenzy and negativity deserves the best possible presentation. Grandpa and grandma surely agree.