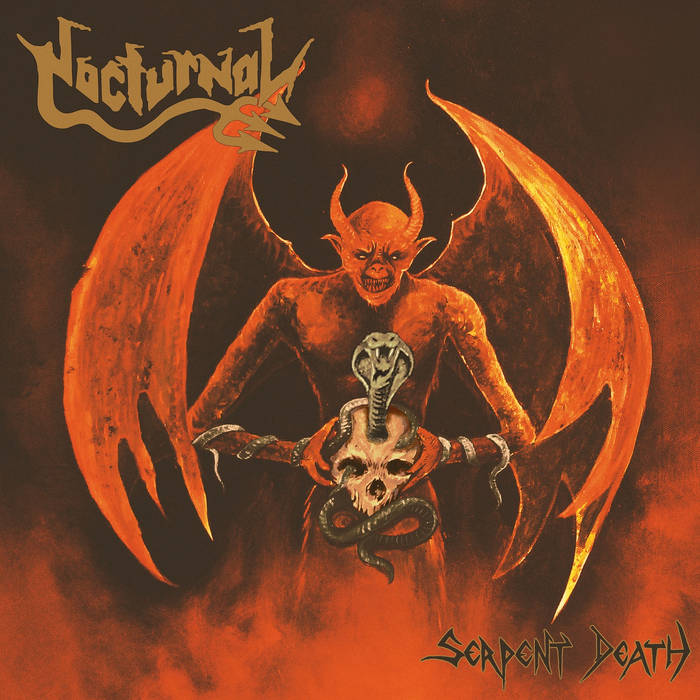 I was really happy when I saw the announcement of a new Nocturnal album. Okay, the split release with Nuctemeron had not been the most exciting 7” ever, but who really cares about EPs? Of course, “Expurse Of Sodomy”, “Flag Of Hate” … but the rest? Either way, here Nocturnal showcase their fourth full-length and especially Storming Evil had been a monster of an album. So, my expectations were high. Too high.

It’s sad to say it, but Nocturnal have lost their teeth. The almost completely new line-up cannot bite as merciless as the quartet that was featured on Storming Evil. Three things have changed for the worst. The first one is the technical component. The production lacks the cruel element that ornamented the one of the predecessors. No, this is no mix that makes me cry, but the brutality of their masterpiece from the year 2014. Nevertheless, the technically well produced album lacks penetrative power. The second detail is the vocal performance of Invoker. He did a good job on Witchhunter’s “Bloodthirsty Eyes”, but here he fights a losing battle in comparison with Tyrannizer. She was able to bring damnation with every word she spat out. By contrast, Invoker’s performance has nothing that makes it to a special one. He is there and plays his part, but he fails to give the album his individual aroma.

Thirdly, the song material must also be mentioned. One can start with an eight minute song, but not with a pretty average, overlong title like 'Black Ritual Tower'. Yes, Invoker does not add an extra portion of malice, but this does not mean that nearly endless instrumental parts are the solution. Tracks like 'Bleeding Heaven' or the crisp 'Void Dweller' show the typical, great Nocturnal riffing – technical yet furious. They deliver more or less exactly the kind of black thrash that made the band to such an exciting one. Yet there are also songs that border on comparatively light speed metal or, even worse, tracks who like to bore the listener. Not a single second of the ordinary mid-tempo track 'Circle Of Thirteen' is really interesting – and this “Maiden in heavy” number almost lasts six and a half minutes. The partly traditional 'The Iron Throne' with its galloping guitars almost sounds like an alien on this work, as if it wants to challenge the equally unusual fun tracks of Protector, but Nocturnal was not born in order to tell jokes. From my point of view, this is another downer.

Due to these three unsatisfying components, Serpent Death fails to create the bestial aura of Storming Evil. The artwork does not make things better, quite the opposite. The ridiculous character with arms as thin as matches does not look like a guy one has to fear. In short, it’s not frustrating but somewhat disillusioning to listen to Serpent Death. I’m sure, Avenger, the head of the horde, can do it better. He has released a still solid record with a handful of tracks that have a murderous facet, but the trend is not on his side. And now I listen to 'Taken By Fire'...