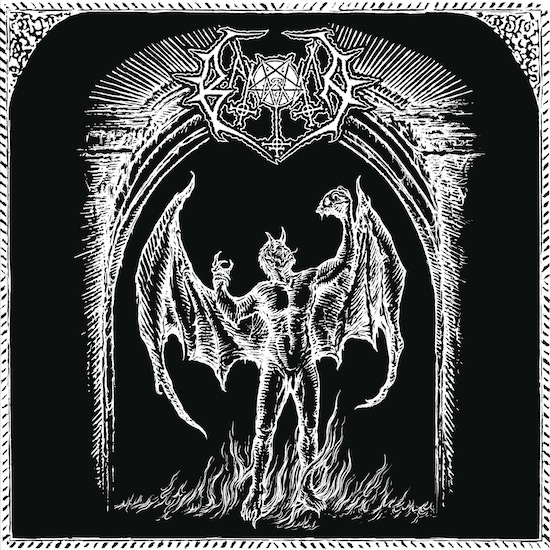 Baxaxaxa are reminiscent of the shy boy who first can't get a word out at the party for hours, only to suddenly burst into a torrent of words late in the evening. Catacomb Cult is the third release within 1.5 years - and that after 27 years off the air. Well, what does the initially silent kid have to say?

The first full album stands out a little from The Old Evil in that it sounds less rough. Of course, we are not dealing with a polished production here. But nevertheless, it is clear that the music thunders out of the speakers in a less rowdy manner. But there is still no lack of density and intensity. strong>Catacomb Cult sounds more or less like Hellhammer would sound if they were still active. This production approach is combined with the musical approach, which in its simple but at times excellent purity is reminiscent of Moonblood.

So it happens that Baxaxaxa stir around in the primordial soup of black metal with a big spoon, naturally not finding any new ingredients in the bubbling, viscous and boiling hot liquid, but ultimately serving a dish that one likes to eat again and again. Because it tastes not only musical, but also spiritual. The spirit of black metal is palpable, even if we have all never seen it before. Baxaxaxa string together ponderous, triumphant, centennially heavy, misanthropic and anti-clerical guitar lines that all have only one thing in mind: to celebrate true black metal, and to do so on the basis of an atmosphere that is hard to resist. The dominating mid-tempo passages allow the guitars the space to unfold their full destructive power. This simple method works excellently almost throughout, only the beginning of 'Walpurgis Dancers' with its staccato and the somewhat powerless background vocals stands out negatively. Exactly after 113 seconds, however, the band gets on track and delivers an elegant, yet pitch-black guitar carpet, on which the lead singer lets off steam charismatically. However, he never becomes hysterical, but delivers his malice in a targeted and controlled manner.

The album with a playing time of about 47 minutes impresses with a good flow and its - despite the very limited stylistic framework - variety. Catacomb Cult sprays musty vibrations, but never seems lifeless, boring or emotionless itself. This is also a merit of the relatively rare, fast sections, which make e.g., the strong 'Ghosts Of Törzburg' with its excellent chorus a bit stronger. Against this late jewel, the final 'Temple Of The Seven Keys' cannot keep up, as it lacks the magical power of primitiveness despite its unchanged approach. But well, not everything can work out - and in the end, the strong, mystically inspired tracks like 'Flames Of Redemption' and 'Kingdom Ablaze' or the pretty brutal 'As The Moon Inhaled All Sunrays' (not Sundays, thank God) clearly rule on Catacomb Cult. So, I'll disappear into the catacombs for the time being. Who's coming along?