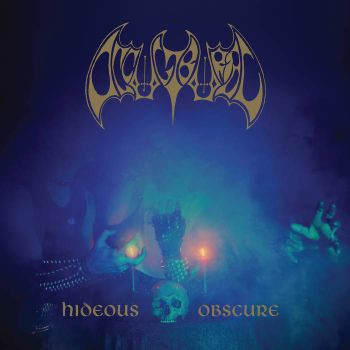 History knows many artists who only became famous after their death. Van Gogh is the prime example. But there are also examples in extreme metal in a weakened form. I still remember well how the German metal press, at least, blasphemed about the early Venom for many years. Incompetent incompetents, that was the tenor. It's just amazing how many musicians were influenced by this oh-so-incompetent trio.

Occult Burial have clearly listened to a lot, maybe too much Venom. They play a primeval mixture of thrash, speed and black metal, trace elements of traditional heavy metal can be found as well as the simplicity of punk. That's pretty much what Venom labelled as black metal in the early 80s, whereas today we understand something completely different, much broader under this style designation. Be that as it may, not only the first sequences of 'Ancient Returns' sound exactly like the classic trio around Cronos. Or after young Quorthon (R.I.P.), but he was basically nothing more than the Swedish edition of Conrad Lant.

Unfortunately, a good influence is not synonymous with a good album by the respective musical successors. Hideous Obscure lacks power and steam, both compositionally and in terms of production. Elements of madness help every extreme metal work, but they are missing here. It would be too much to dismiss this debut as a mere tribute album. But when the vocal acrobat at the beginning of the sixth track murmurs into the mic exactly in the pitch of Cronos's "Evil Metal", the protagonists should not be surprised that you get the impression that you are dealing with a parody. At least, the title in question ('A Witch Shall Be Born..') brings a real bang to the music.

In general, after a very mediocre start, the album gains a little in quality the longer it runs. A few successful double bass entries at least provide a certain degree of intensity, the vocals at least approach hysterical realms from time to time and the dudes from Ottawa (of course there are three dudes, don't tell me this is a coincidence) at least avoid gross bloopers. But that can't hide the fact that the short record (playing time under 32 minutes) lacks fire, energy and the good will to destroy. Unfortunately, no single song really stands out above the rest. A few good riffs are present, but only rarely can a strong song be formed from them. The whole thing sounds like a demo pressed onto a CD that can't find its way in its new environment. No question, the debut of Venom had more charm.