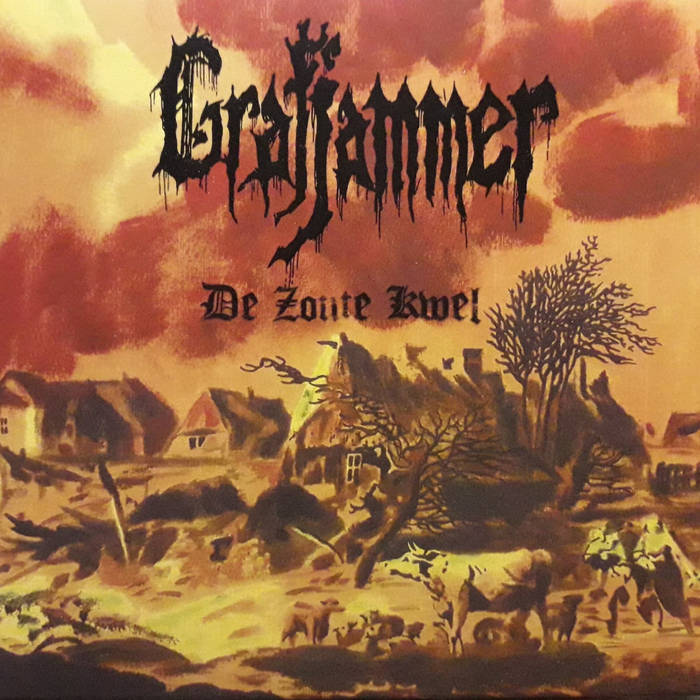 On their new album De Zoute Kwel, the Dutch band Grafjammer takes us into the abysses of Utrecht's underworld where suicidal people, knifemen and other friendly fellows are talked about. Dutch folk tales and ghost stories served as the basis for this. So much for the lyrical classification. Musically we get to hear old school black metal, which is known mainly from bands from Norway, coupled with a dash of rock'n'roll, punk and Dutch folklore.

The first two songs 'Jajempriester' and 'Affreus. Infaam. Abject.' are pure black metal, where you get bludgeoned until the doctor comes. 'Zelfverminkers & Spiritusdrinkers' starts with a sample from the Utrecht train station (when I think of the German train stations, the title fits quite well, you cannot really enter them when sober) and then slowly crawls off. With the song it is like drinking a bottle of schnapps. First everything is nice, and you are in a good mood, but the emptier the bottle, the more uncomfortable you feel - the song reflects this very well. The tempo increases more and more, and the song finally becomes very uncomfortable, just like the morning after.

'De Bijlman Van Trecht' starts off furiously fast, only to pause slowly in the middle section and then end at a furious pace. The voice of Jorre sounds incredibly vicious when he sings the lyrics to this - you could think that he himself is the axe-wielding psychopath from Utrecht. 'De Baakboordshand' impresses with a nice folkoristic ending, accompanied by swearing and cackling (in Dutch, of course), great!

'Bijbelgordelgesel' starts punky, in the further course you can even guess some death metal riffs. The song is a cool high-speed riff storm, again the singer impresses here. 'Maak Het Kort' is about the last minutes of a delinquent who asks his executioner to make it short. Here, too, the singer knows how to convince with his intonation; musically, 'Maak Het Kort' is a very catchy song and, as the name suggests, very short. 'Kolkgat' offers the listener an absolutely sick song at the end, which starts very dragging and uncomfortable and picks up speed significantly in the middle. The spoken, hateful sentences of Jorre do the rest to create an unpleasant atmosphere.

Regarding the production, there are no complaints on my part, I find it very powerful and clear, everything in the green zone.

If you like traditional black metal, you should give this a listen, even if you don't understand Dutch, it's definitely worth it. Apart from that, who else but Scandinavians can understand Scandinavian languages perfectly? Goed gemaakt!!!