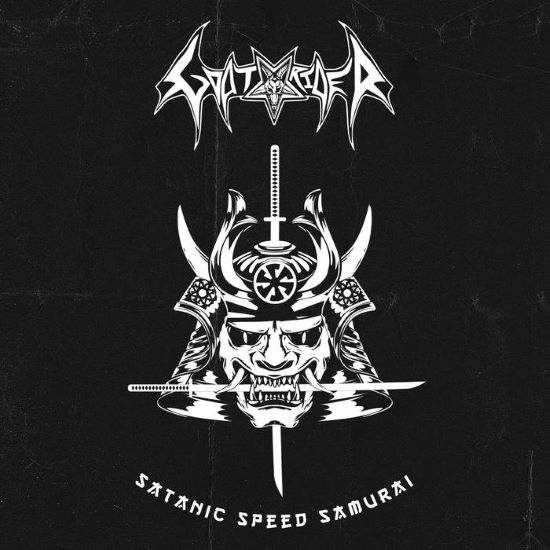 Goat Rider's first release was rock solid and well executed, taking into account it was performed by a duo that managed to record everything (drums, bass, guitars and vocals) on their own. For this demo they hired a proper drummer and stepped up their game, rhythmically speaking. It's not like the drum tracks from the first album were bad at all; but on this offering dynamics are more stable, drum fills are a little bit more creative and there's even a small blast beat section at the end of track 3, 'Satanic Speed Samurai'. There are also some ultra fast double bass drum sections that weren't present on High Speed From Hell.

This demo consists of 4 tracks, 'Kamikaze' and 'Satanic Speed Samurai' are traditional Goat Rider songs, accelerated black/thrash with hints of hardcore punk. 'Harakiri At WWII' features a different approach to riffing, slower and heavier. It reminds me of 'Countess Bathory', the influence they get from Venom's first couple of albums is very strong. 'Katana' is also contrasting to the fast numbers we usually get from these kids but this time, instead of being slower and gloomy or heavier they experimented with a laid back, traditional rock and roll style riffing in the first couple of minutes. There's a lot of NWOBHM on Goat Rider even if their main genre is more extreme.

In terms of production; they also managed to get a wet mix with some reverb that sounds still rough but a little bit more professional perhaps. Vocals remain as aggressive as always, high pitched shrieks like Quorton's. The reverb driven production kind of made them more cavernous and hellish, while they intelligently avoided falling into the illegible pit of Portal/Incantation imitations that pollulate nowadays. The guitar tone is raw amp distortion, and there are some nice licks and solos thrown here and there. The bass is not as prominent as it was on their first recording but you can find it pounding on the back, anchoring the drums with the guitars. This album is as lethal as a Harakiri, give it a spin right away!