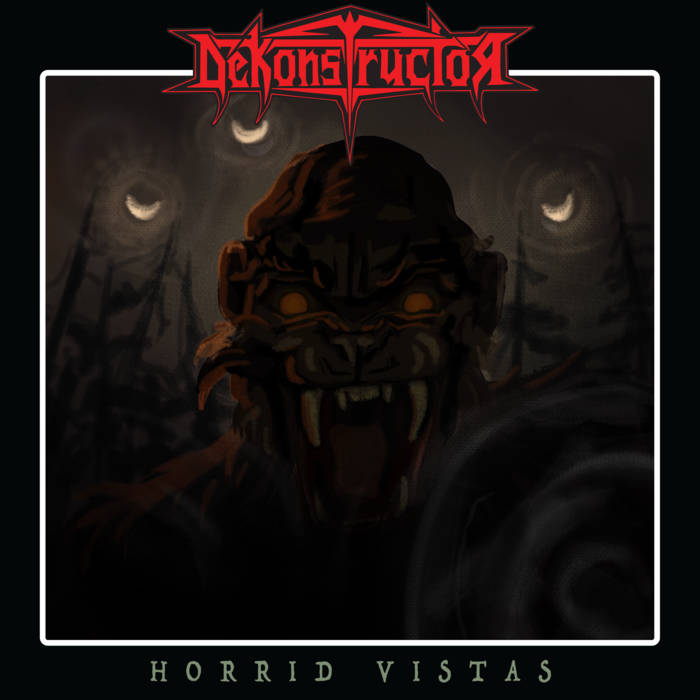 You might think Horrid Vistas is a compilation (but it isn’t) because it features remixed and remastered versions of the songs recorded for the band’s debut EP, Life Sucking Machines. Those versions were unpolished and released for promotion purposes but now they are presented in all their glory. The bass tracks were rerecorded by Daniel Kohkemper -Life Sucking Machines featured another bassist that used a fretless instrument- and it augmented tremendously the songs’ punch overall. Slap and tapping techniques are present on the rhythmically oriented sections, perfectly applied. It’s not a groovy or funky bass at all, the bright clanky notes favour the band’s new mechanical and industrial sound and skin. The use of effects on the bass is also remarkable, as they are used wisely and don't strip the music from it’s heavy, obscure and aggressive nature.

Vocal tracks are great, traditional angry thrash spits. Not extremely raspy or guttural but mean enough to make you get the message without even understanding the lyrics. Guitars are sharp on the palm muted parts, creamy on the open chords and volatile on the solo sections, great sound modelling and artistic choices. The drum kit sounds super acoustic and his performance is top tier, probably one of the best drummers here in Costa Rica. Solid and even double bass drum sections, infinite tom rolls and nice use of the cymbals. The songs featured here were composed and arranged on the same sessions with ex drummer Diego Arce and this album functions as the closing of that chapter for the band, which is already looking for a new drummer to play even newer and unheard material.

The album is almost one hour long and its format is so well adjusted that it sounds like a “producer” thrash metal record. While the first 3 songs are a little bit more direct, the fourth track features a fresh “acoustic” intro with a western feel, Marty Friedman’s influence maybe? And while it's particularly heavy, it's also slower. The bass lines themselves are not groovy but those mid paced sections have some of that, I have to admit. After another 3 piece set of violent tracks there’s a slower and more melodic bass solo section on 'Grandeur Delirium' to desaturate the ear a little. 'Troops Of The Underground' is the last fast bullet and the album closer 'Horrid Vistas' is an epic riffy instrumental. While this is not retro thrash it has a renewed but still vintage sound with class, great album!