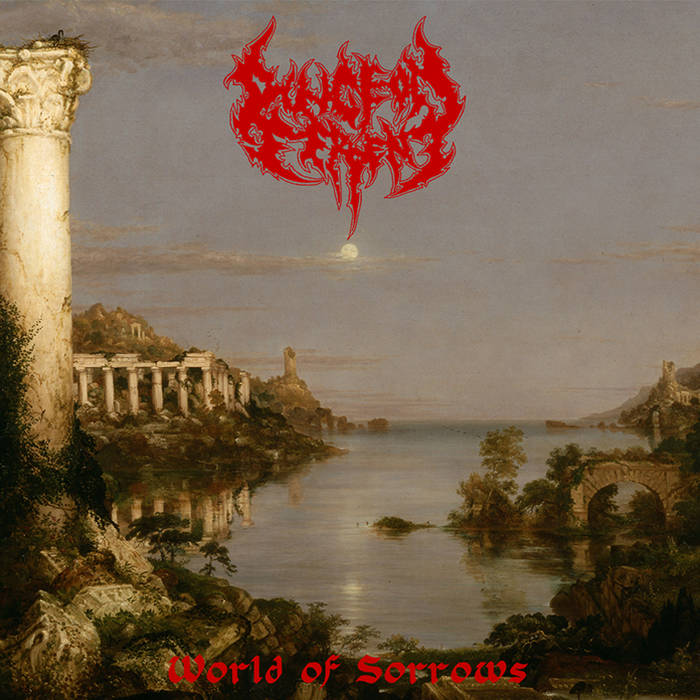 There has been no shortage of death metal in recent years, more like, there has been a flood of it, and seemingly burrowing exclusively from the American and Swedish styles, however, at some point after so much Morbid Angel and Entombed worship someone had to do something different, right? That is the case today with Canadian solo act, Dungeon Serpent, through their debut record: World Of Sorrows, released independently on Bandcamp and by Nameless Grave Records on CD.

Dungeon Serpent is a new project by multi-instrumentalist Arawn, and other than this new LP, he had a 2-track demo released independently online in 2020 and went the full-length route a year later, and this is the record worth checking since the 2 tracks of that promo are here, re-recorded to their fullest potential. Musically, Dungeon Serpent can be described as melodic death metal, however, while there are some familiar traces of Swedish “melodeath”, this album’s sound and atmosphere is wholly unique. For starters, the major standout instrument is the guitar, the riffs and melodies are the driving force of all songs, and this is where the melodicism differs from the standard melodic death metal mold. Arawn seems to take cues less from NWOBHM and more from American heavy metal and some hints of early thrash, and most notably, elements of medieval music and sensibilities, which is odd in a good way for a death metal record. The music has a somber and melancholic tinge that is very uncommon but a very welcomed diversion from the death metal formula, especially given the surge of death metal revivalists. But make no mistake, this album is still a proud and true display of death metal. There is no shortage of galloping riffs, solos and fast tempos to please any fan of death metal, and the more mystical musicality, which makes use of synths and ambient passages in key moments of each song, serves to enhance and push the genre to new heights.

The medieval and ancient feeling of the music is also present in the lyrics. Arawn was able to craft an album where the music and lyrics fully coalesce to create the arcane atmosphere that makes the record so unique, which brings me to the otherworldly growls of Arawn. Much like the music, the vocal work feels familiar but different; the dry vocals are soaked with reverb and perfectly complement the music to a tee. The only real flaws I found with the record is that the bass is not as prominent as the guitars and the drumming is clearly programmed. Now, while there’s nothing wrong with artists using a drum machine if they can’t hire a drummer, I feel that the music would greatly benefit if Arawn had been able to get one but as it is, the programmed drums get the job done, and it sounds good enough. I’m only pointing out my own preference of having organic instrumentation.

The final aspect worth noting is the album’s overall composition and length, and this is both a strength and a minor weakness. At 5 tracks and 35 minutes, the album is a nice and to the point package, despite the more esoteric aspects that make the album unique. Having a relatively digestible length is a good way to ease in novices into death metal, however, given how unique and long the songs are, especially taking into account the eponymous 11 minute instrumental closing track which is also one of the best tracks of the whole album. If the album had 2 more tracks and was 10 minutes longer it would’ve been a genuinely epic experience, alas, this again my own personal tastes, because for what it is, World Of Sorrows is a genuinely great and unique death metal record that simultaneously feels ancient and fresh. So, unsheathe your sword and grab a flagon of ale, because this album beckons you to embark on an odyssey, and Dungeon Serpent is a name to reckon in the current landscape of death metal.