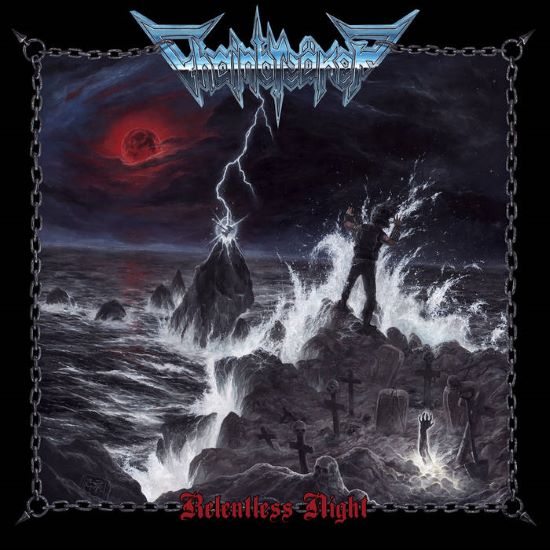 At the end of October 2020, Austria's juvenile demolition squad called Chainbreäker reported back. Wasteland City had been a promising debut that, to my recollection, stood with both feet on the ground of old school thrash. That's what old geezers like me enjoy, who categorically reject innovations in thrash since the advent of the first headbands and Bermuda shorts (I only say Anthrax and Suicidal Tendencies). Unfortunately, a few details have now slipped in on Relentless Night that I would rather assign to speed metal, for example the squealing solo in 'Nightstalker', the Viking metal-like opening of 'Into Eternal Silence' or the closing track 'S.M.P.' with the warped guitar in the chorus. Suddenly the rebellious undertone of pure thrash is no longer in the foreground, instead you enjoy the fast guitar playing as an end in itself. That is a bit of a pity.

But there is also good news from Austria. No, I don't mean that the hotels there are opening again after all the Corona nonsense. Rather, the thrash hammer dominates on Relentless Night. Or should I better say the thrash saw? The guitars of energetic, lively blasts like 'Iron Grave' cut, saw and tear everything to pieces, that's for sure. Other bursts of thrashing viciousness are also right on target. 'Vile Hounds' starts off relatively restrained but builds up almost intoxicatingly. Of course, one can be of the opinion that the guys don't know how good thrash has to sound. But whoever holds this opinion probably also claims that the earth is a disc.

The album was recorded in a studio in Braunau (near Linz) and it simply sounds good. Its mix glitters with sharpness, transparency and well-defined instrumentation. If one of my grandfathers were still alive, he would surely say now that it was about damn time that something positive finally came out of Braunau - but that's another story. Let’s get back to the production of this ten-tracks-work. Everything is well-balanced and this makes it easy to forget the less strong moments. For example, I do not really know why the casually titled, but musically only solid 'A Prayer Down the Drain' is twice as long as the other tracks. However, I don’t care. Relentless Night is not as excellent as Wasteland City but still a good release. The pretty variable shouting of the lead vocalist reflects the passion and the enthusiasm of the guys, and it just makes fun to stumble about some early Slayer riffs in the instrumental parts of 'The Axe'. However, the best is yet to come. 'Out Of The Crypt' marks the restless, fast-paced, straight and deadly highlight. It shows the glory of a catchy one-tone-chorus which is embedded in a perfectly thrashing surrounding. Of course, reinforcing background shouts must not be missing in this context. So, there is no doubt in my mind: you can also have fun with the second best record by Chainbreäker.

Chainbreäker from Austria have a good start releasing their sophomore album Relentless Night via Metal on Metal Records. Visually, the quartet has already improved significantly (as far as the cover is concerned) and I personally think that the cover often decides whether you want to listen to an album or not, so there is already a plus point for this.

Album starts with a short keyboard intro, which could have come from a horror movie of the 80's and then the four Austrians start with 'Nightstalker'. Direct and straightforward mixture of speed and thrash metal that falls in the ear and stays there. Cool, catchy riffs and melodic solos form the heart of the whole. 'Vile Hounds' impresses with vicious vocals and riffs (especially at the beginning, which almost sound like death metal). The next tracks are quite fast too with hypnotic, repetitive and fast riffs. A bit of Iron Maiden comes out here and there. 'Relentless Night' starts off Motörhead-like, only to turn into a fast speed killer song that is one of the catchiest songs on the album. The singer sounds extremely hateful, which adds atmosphere to the song. The cool attitude is further enhanced by the gang shouts. With 'The Axe' the guys take the axe out of the closet and poach in Slayer territory. Paired with ingenious solos, it also becomes a highlight, cool track!!! The remaining songs keep up with the high level of the other tracks and here and there again the homage to Iron Maiden and Slayer is paid but personally I'm not disturbed by this in any way.

What particularly excites me about the CD is (as already mentioned a few times) a combination of melodic solos, paired with energetic, driving riffs which always show musical finesse. The aggressiveness that singer Christoph puts on the day, makes the whole thing round. A good mixture of speed, thrash and classic heavy metal, which one likes to listen to more often. Production-wise, the somewhat wooden drums bother me a bit, but otherwise I find everything arranged very appealing, so here's another plus point.

As a conclusion I would say, that whoever goes for speed/thrash metal and gets singers of Agent Steel, Ranger or Vulture style can access here without hesitation. Cool album that does not reinvent the wheel but is very solid and entertaining.