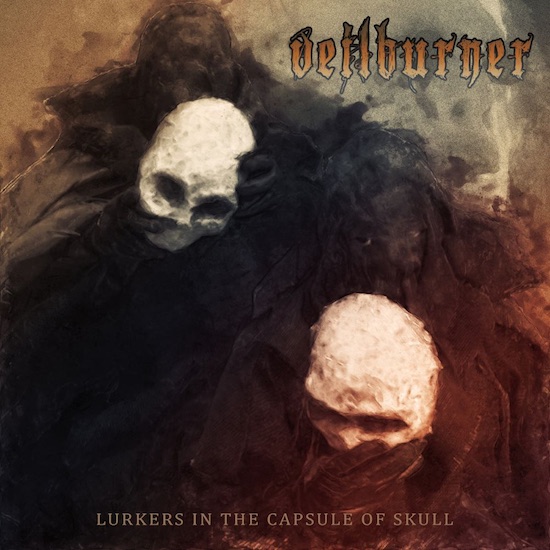 At this point, I wouldn't be offended if you thought I was just throwing in Transcending Obscurity releases to these top 10 lists as a way of paying off some massive lifelong debt I owe to the label. The reality is much more boring: I like music that's weird and challenging while remaining rooted in extreme metal, and T.O. seems to seek out bands across multiple genres with the intention to pursue this type of fringe sound.

Veilburner are no doubt one of the more unusual bands in the label's catalog - though not quite as jarring as Diskord or as starkly dissonant as Norse, these two masked Americans have a natural oddity to their chord shapes and a swirling psychedelia that accompanies most of them, giving an inviting warmth and eerie, antiquated horror movie soundtrack sensation to what are ostensibly very heavy and extreme riffs. If you've been spending your time looking for any kind of music in the same sonic ballpark as Akercocke, you can finally put that search to rest, because that's about the only band I can think of to compare to Veilburner (minus Jason Mendonça's trademark clean vocals, of course).

With the wide array of textures and distorted twists and turns on Lurkers In The Capsule Of Skull, it's downright impressive how listenable this record is. Sonically, this isn't very similar to Blut Aus Nord, but Veiburner shares Vindsval's innate ability to create an entrancing, emotive guitar line out of warbling dissonance. Although one member handles all the instruments (with one other separate person on vocals), this sounds dense and multifaceted while staying coherent. If the drums are programmed, it is not at all as detrimental as it should be. Lurkers In The Capsule Of Skull is a very complete, intricate album, which is even more impressive when you consider this is the band's fifth full-length album in just seven years of existence (and the one before it was just as complex!)