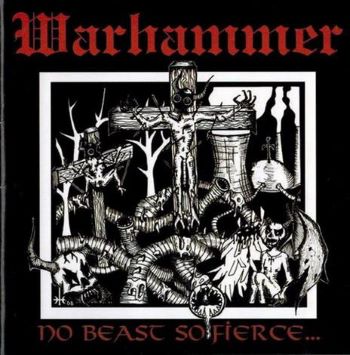 No evolution, no change, no repentance. Warhammer worship these well-known Swiss pioneers and they do it in a dignified manner. Already the sound of No Beast So Fierce..., their first album after six long years of silence, speaks volumes. This chunky, heavyweight guitar rolls like a bulldozer over the audience and the vocals have exactly the evil vibes that one expects. The thick mix seemingly intends to suffocate the unsuspecting listener and it is almost successful in doing so. It's like a sticky substance which is emptied over the head of the consumer. High fidelity aesthetes will faint, but the hardened target group grins maliciously while sorting their collection of old school metal shirts.

Warhammer are angry, and their emotional state is motivation enough to increase the average velocity. Without verifying their style, they surprise with many fast-paced songs. Don't worry, the doom elements do not completely disappear, because all compositions contribute to the fatalistic overall impression of the fierce beast. Yet those of you who inevitably connect doom metal with rhythmic inertia will be of the opinion that the thrash and death metal components have gained the upper hand. From my perspective, this fact is an important factor for the high quality of the narrow-minded album. The frightening lava sound of 'The Bloodstained Shadow' shows the listener the way to the flaming gates of hell, but the faster songs are even better. Anyway, instead of always looking right and left, in order to see what the other (mostly fickle) bands are doing, Warhammer only know one direction: straight forward on the path that Hellhammer discovered roughly 35 years ago.

Breaks are more or less "terra incognita" for the band. The efficient Germans are of the opinion that one riff and one tempo is enough to create a great, poignant and monolithic track. A tempo change is allowed every now and then, but it is obvious that the band members think that too much diversity endangers the health of both musicians and listeners. I agree! Warhammer score with simplicity, primitiveness and rudeness, no more, no less. A cobbler should stick to his last, right? The world is full of metal mathematicians, apostles of progress and Wacken adventure "metalheads". Warhammer is the counterpart. Instead of begging for attention or showcasing their technical skills, they are self-sufficient - but not lethargic!

In other words, Warhammer are still inspired in their own way. The result is that one grinding crusher chases the other. Volker Frerich, the uncompromising lead vocalist, informs the audience at an early stage that "all hope is abolished" and those who do not like the first track should take this statement seriously. Everybody else enjoys in particular irresistible meat chunks such as 'Flames Of Armageddon', '...from the Absence Of The Sun', 'Frozen Screams' or 'Total Maniac' where the drummer takes a wild ride on his cymbals. Noteworthy is that some of the songs are ornamented with an almost catchy chorus and generally speaking, there is absolutely no downer on this album. Each and every song spreads these meaty and bloody, morbid and grim vibrations. Warhammer remind us of the fact that real, extreme metal has to be repulsive. Long story short, No Beast So Fierce... gives the drooling mob what it asks for.