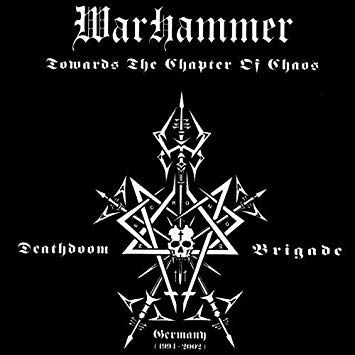 Type: Compilation
Release Date: 2003
Label: Nuclear Blast
Genre: Death, Doom, Thrash
1 Warzones
2 Predictions Of Doom
3 The Tempter Of Destruction
4 The Void Inside The Darkness
5 Tales Of The Macabre (Slaughter Cover)
6 The Warprayer
7 The Rise Of The Living Dead
8 The Thorn Of Damnation
9 Dawn Of The Cadaver Ghoul
10 Fall Of The Iconoclast
11 Imposters For All Times
12 Curse Of The Sabbath (Necronom's Evocation)
MetalBite on YouTube

What is there still to be said about Germany's Warhammer that has not yet been stated long before? I always appreciated them for their unwavering old school approach, no matter of the ridicule that their truly hardcore dedication to Hellhammer and their music may have incited from some parts of the metal underground. Warhammer simply did their thing and told the rest to fuck off.

I don't think I have to explain the Warhammer sound to anyone who might be reading this. They loved Hellhammer. A lot. Perhaps even to the point of sexual arousal, I sometimes think. The raw sound, the jagged riffing, the gruff throaty vocals, the sometimes-sloppy execution, the aesthetics on their releases, it all has the name Hellhammer emanating from every orifice. The band admitted freely that that was their only goal, and they did their utmost best to copy their biggest inspiration, and in that they succeeded.

Much like their biggest inspiration, Warhammer serves up a good balance between primitive faster material and crushing doom metal numbers, managing to inject a certain amount of variation into their somewhat one-sided sound. If you hear them more often, you can actually hear some other influences seeping through all the worship/plagiarism. In the slow doomed out tracks they sometimes have me thinking of acts such as Saint Vitus and Winter. In the case of the latter perhaps not surprising, because Winter also had a sizeable Celtic Frost/Hellhammer edge to their material, but the guitar tone and sluggish tempo definitely give me this early Saint Vitus vibe. In their more up-tempo tracks, I sometimes hear some Discharge bubbling up to the surface, another act that dealt in stripped down acidic fury, comparable in attitude to Hellhammer, perhaps. A nice touch in between their own material on offer here, is the inclusion of a cover of the Slaughter classic 'Tales Of The Macabre', a band I once heard being described as a cross between early Slayer and, you guessed it, Hellhammer. As you have probably figured out by now, Warhammer worked around a concept, and they stuck to it doggedly.

As this is a compilation of demos and other recordings, the sound quality differs here and there, but for a collection of old material the sound quality never deteriorates into noisy mush. Sure, it sounds raw and unpolished, but come on, there is no way to imagine Warhammer with a production like that of a band like Suicide Silence or other rubbish like that, right? This is pure underground, old school, no frills death/black/doom metal, so what is there not to like about these guys? Original they ain't by a long shot, but boy, is this awesome!

This is an interesting compilation, but only for the Warhammer enthusiast, even if it was just for the Slaughter cover. To those just starting to explore the band, I'd say to start with their albums in chronological order. Or you could just go back further and just start with Hellhammer's "Apocalyptic Raids", of course.