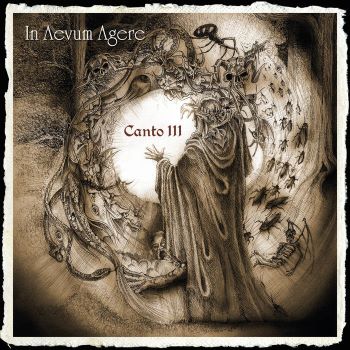 So, now I finally get around to reviewing a doom metal album. I have to explain why I rarely do that. The reason is that I want to write a review about the music that I can listen to mostly while jogging or biking and so doom is rather unfavorable for a good pace. But today it's so hot in good old Germany that I'm not really motivated to do any sport (except watching England vs. Scotland with a cold beer in my hand tonight). But enough of the personal stuff, now to the music....

Oha, what's in store for me? That was the first impression I had when I heard Canto III by In Aevum Agere for the first time. After a short intro music starts quite aggressively. My first thought was Morbid Angel in a doom metal variant. The riffing and the drums (a fat double bass) led me down that path. But when the vocals start, one is rather reminded of Candlemass or Sorcerer. Whereby singer Bruno sounds at 'L'uom s'etterna' as if Rob Lowe and Mark Sheldon (R.I.P.) had a common offspring.

Musically Italian trio offers quite appealing doom metal. Especially the melodic riffing and the epic melodies remind again and again of the above mentioned bands. 'No Hope Of Death' could easily be found on one of the newer Candlemass albums with its powerful riffs, wonderfully dragging melodies and a Black Sabbath riff here and there. Suitable to all this is the desperate singing, a great song! 'The Great Refusal (Ignavus)' is similarly structured and again sophisticated melodies and riffs are offered. However, I am missing that certain something, I'm missing a 'surprise' in the song. In my opinion, the band should have added a 'turner' to the conclusion of it since the song ends so abruptly. 'Anti-Inferno / Limbus Animae' starts very quietly and increases more and more in drama and speed in the course of the song. It's where the guitarist / bassist / singer Bruno shows what he has in the box. The repetitive bass from minute 5 sounds very threatening and the howling guitars make the piece a true doom roller to the very end. The title track sounds quite convoluted and complicated and unfolds its effects only after repeated listenings but even here the listener is offered good doom, which is, however, a bit minded. 'Voices Of My Solitude' offers a doom worthy conclusion. A deeply sad song with dragging melodies paired with desperate vocals. Handkerchiefs out!!!

What bothers me a bit are the intros between the songs, but that's a matter of taste. This also bothered me with the first Acheron or "Testimony of the Ancients" by Pestilence. The production is perfectly fine though, especially the drums I find sounding great. Everything fits, nothing is overdriven or underproduced - good work. Finally, I would like to come briefly to the cover. This looks excellent, very many loving details to discover - you should definitely take the time to look at it more intensely.

I can recommend the album to all those who like to listen to epic doom. It does not reinvent the genre, but it is well worth listening to. As for me, I was not as convinced by the last Sorcerer as I was by Canto III.