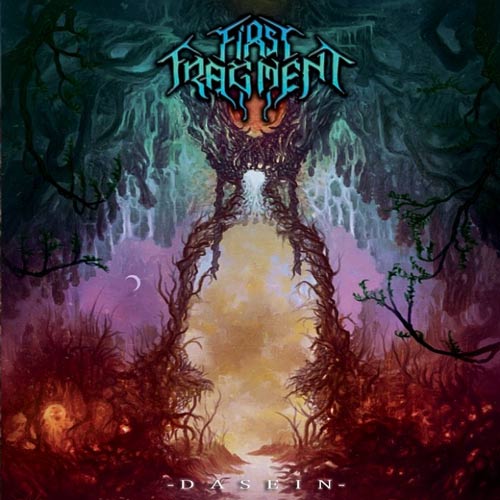 With a new First Fragment album on the horizon, I decided to take some time to appreciate their first full length album, "Dasein," released way back in the prehistoric times of 2016. Strap in, kids, we're talking about Canadian technical death metal - in case Archspire, Beyond Creation, Augury, Cryptopsy, Gorguts and the countless other Canadian technical death metal bands weren't enough for you, allow Phil Tougas and company to punch you in the face repeatedly with an explosive display of technical wizardry.

It should probably come as no surprise that this album is extremely virtuous, as the lineup is absolutely stacked in every position. Just doing a skim through of the bands associated with the members of this band should make anyone go "holy fuck, I'm in for a ride." And you'd be right - "Dasein" is absurdly technical. Complete with two guitarists that play like they have 31 fingers each, a fretless bass that shreds like a lead guitar and a drummer who has more energy than a horse on meth, First Fragment put on an absolute display throughout the entirety of this record. Despite there being only 11 songs on this album, there has to be like 50-60 solos on this fucking thing. Each song is loaded with awe inspiring lead work and relentless drumming. This is, of course, the pinnacle of technical music in some regards - it has the bouncy melodicism of Beyond Creation, the ferocity and rage of Decrepit Birth, the feel of an Obscura record and the vocals of Satan gracing the entire thing. While it's on, it's good music. Certainly not background music, it requires a lot of attention to really "get." The technicality is enough to wow anyone, but the songwriting does unfortunately suffer as a result.

The biggest negative takeaway I get from this album is that it does not flow well. I've listened to this record at least 25 times from front to back and there are still songs that I couldn't tell you a single note from. This comes from the fact that a lot of what's going on sounds the same and if you're not really focusing all of your thought process on the music, it just sounds like a wall of notes rather than what it's supposed to be, a wall of beautiful notes. Technicality can only take the music so far if the songs can't make a name for themselves. That's not to say the album is without its highlights - "Gula" isn't just the band's best work, it's a highlight for modern tech death as a whole, a super melodic song with a great groove to it and catchy bass work that'll stay stuck in your head all day. "Emergence" benefits from superb vocal work and is the heaviest song on the record, punishing the listener with blast beats from hell and sick riffs.

Speaking of riffs, the ones on "Dasein" are… meh. Some good ones for sure, but it's clear more focus was given to the leads rather than the riffs, which is fine, but I would be lying if I said I didn't think riffs are more important than leads. Rarely are you hit with genuine death metal riffs, as most of the "death metal" comes from the vocal work and the drumming. Other than that, I can't find much in the riff department. I wish they had found more of a balance with this record, but it is a debut at the end of the day.

Back to those vocals for a quick sec - the vocals on this album are top notch. If you've read my reviews, you know I rarely point out the vocals as a huge positive for an album. Seldomly do tech death bands have great vocalists, but First Fragment is one of them. This guy sounds demented! His main growls sound like he's both drugged up and pissed off at the same time. He has a great range with piercing shrieks from the bowels of hell to deranged lows that remind me of a sewage monster emerging from the underworld. Excellent choice for a vocalist.

First Fragment's sophomore album is upon us and the two singles off of it sound great already. Perhaps the band is starting to find their stride, but it would seem that even in 2016 the band was onto something here. Is "Dasein" excellent? Not really. It has moments of greatness but the album as a whole is fairly bloated and a lot of the songs lack identity. Is it bad? Far from it! This is certainly an above average album with a lot going for it. There's a ton of potential for the next album, and it may very well be better than this album, but that's not to say you shouldn't give this one a listen - it's still good. And I seem to have a harsher opinion on it then most people do, so why do you even care what I think? I'm literally a teenager on the Internet that doesn't make any music whatsoever. So don't listen to me, listen to this. You may very well fall in love.