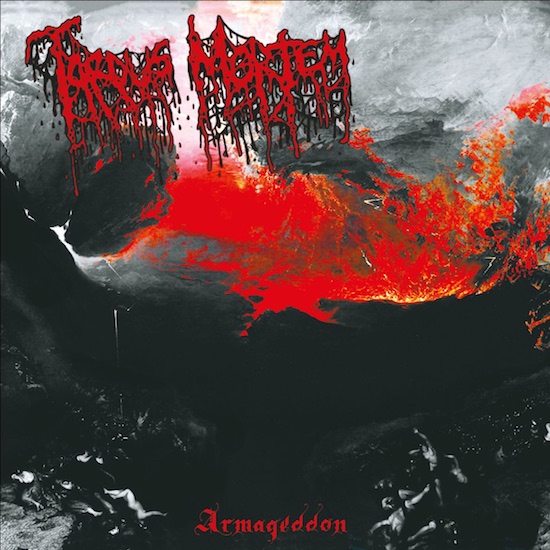 Tardus Mortem easily caught my attention with their debut album that has one of the ugliest productions I've yet to hear in a death metal album. The riffs are all there, however; you would have quite some digging to do before you can find them. The vocals are like a tempest summoned from the abyss of the earth, and the drumming or at least what you can make out of it, has a primitive coat, somewhat unpolished in terms of composition yet in it lies a chaotic characteristic or aura that adheres to the tumultuous template of the material. 2 years later the band have put their blades of destruction to carve out of the genre yet another brilliant and violent sonic display.

If you were to compare Armageddon to Tardus Mortem's debut full length, you'll immediately notice the production has applied a bit of sheen to the old lumber. The vocals appear more distinguishable yet still indiscernible whilst the riffs are given a spotlight of sorts such that you don't have to go sifting through the distortion and crumbling production. The drumming also appears to have undergone some work; yes there is still the mark of confusion and brief outbursts of technicality, but through the production, emanates and reflects a less impulsive more controlled and mature hand on the sticks. Also, there is a definite step up in the song writing here as there are more parts that beak away from the leads and venture off into their own sub territories but still corelate with the primary idea of the album. Definitely borrowing from Incantation but still has at its core a strong and overpowering identity of its own. Operating without fear, Tardus Mortem take their sound to depths new and destructive.

Its pretty much a night and day contrast with Armageddon, its technically superior, compositionally mature, the production value is reminiscent to something more akin to that of a band aiming for clarity in their music such that their strengths could be highlighted and appreciated. Take for example opening track 'Condemned To The Halls Of Infernal Sin', it’s not hard to hear that the band wrote that song with a lot of feeling as you'd hear the rhythmic commotion descend into an acoustic instrumental piece before reverting to the storm of growls and militant drumming. Then there's 'From Heaven's Throne Thee Bring Forth Death' making its entry with stomping aggression and fury armed with a killer lead riff. Then there is that fine line between technicality and chaos that Tardus Mortem walk excellently as neither is overrepresented. Guitars go bat-shit nuts on this track during the soloing segment and has a distinct sound as though masked with a thin sheet of 8bit sound effects.

'Gust Of Armageddon' sum up the effort Tardus Mortem commits to with an ambitious 23-minute runtime challenging the listener to keep up with the instrumental butchery occurring. Mid-paced sections segue into blizzard like gusts of violence while death doom metal parts linger and are held up by instances of melodicism. Armageddon sounds like a capsule of destruction that acts as a protective shield around a sacred thing of beauty. It’s an album that also carries with it the feeling of meticulously carving out an element of innocence only to crush, rip and tear it apart just for the sake of violence.

Can't find anything to complain about where Armageddon is concerned. If there is this much growth taking place in the span of 2 years, then Tardus Mortem are well set for dominance.

And checkout the gravity blast on 'Gust Of Armageddon', fuckin sick.