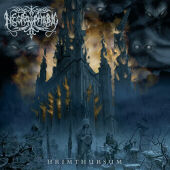 Sometimes I think that real art must be provocative, rebellious and disturbing. Yet this is not to say that I enjoy any form of provocation. Some things are simply idiotic. Does somebody ask for an example? Read the title of the first track of Hrimthursum and you know what I mean. In addition, the cries of the baby during the intro are disgusting as well. This intro is written by lead vocalist Sidegård. Back in 2006, I thought that he is just a very charismatic singer with a demonic aura. Today we know that he is also an antisocial thug. And so, one thing leads to another.

That said, let's take a look at the advantages of Necrophobic's fifth full-length. No doubt, it is imbued with a hellish aura. The champions of black / death metal invite the listener to a journey through landscapes of gruesome images. Each and every song is built upon a diabolic fundament (and so it is a suitable album for my 666th review). Listen to the background choir of the tortured souls in "Age of Chaos" which reappears in the title track. Or lend an ear to the uncanny, solemn yet homicidal lead vocals in "Bloodshed Eyes". They characterize horrifyingly the central section of this track. Not to mention the razor-sharp riffing of the unrelenting album highlight "I Strike with Wrath" which is nothing less than an orgy of cold-blooded violence. Necrophobic demonstrate their technical skills and their song-writing abilities in an almost arrogant manner. No doubt, the Swedes are highly talented musicians - and with regard to their sinister art, they were seemingly born in a very dark and extremely cold winter night. And while we are on the subject of winter, "Eternal Winter" is the speed king of the twelve tracks. The band seems to be possessed by velocity and the rapid rhythms, combined with the typical high-class riffing, shape another very strong song. Yet Necrophobic are not afraid of variations. They also convince while performing slower pieces.

The title track, for instance, chooses a mid-tempo approach. Its profound depth is based on the competent guitar work and the eerie chorus. The female background vocals that I have already mentioned lend the song its dramatic touch. "Sitra Ahra" seems to be a lame stinker in view of its nearly dawdling beginning, but inter alia the chorus sets a sharp contrast. The screaming guitar in the background causes sharp cuts that make this piece compatible with the remaining material. Speaking of the songs in general, Necrophobic's compositional talent leads to an almost immaculate symbiosis of catchiness and brutality. This is all the more remarkable given the fact that all band members have contributed to the material (although lead guitarist Ramstedt has written the lion's share of the compositions). The dudes avoid repetitive structures without being shy of relatively conventional verse-chorus-verse patterns. The tracks are always accessible. Better still, it is neither a tough job to get familiar with the album nor does one grasp every detail during the first or second listening session. Hrimthursum, which is well balanced between extremely harsh and rather melodic parts, grows diabolically while heralding the imminent apocalypse.

Of course, a good production is always helpful and, to be honest, Hrimthursum sounds perfect, no more, no less. The transparency is not at the expense of atmosphere and features such as pressure, density, intensity and brutality are not missing as well. In short, the flaming artwork depicts the aura of the music successfully. It seems as if Necrophobic were focused on a holistic approach. No doubt, the band has worked meticulously in every respect. The result is gargantuan and nothing less is acceptable for an album that hails the ice giants of the German mythology. Thus, join the black celebration of Necrophobic. If you have not yet listened to Hrimthursum, then it is high time.