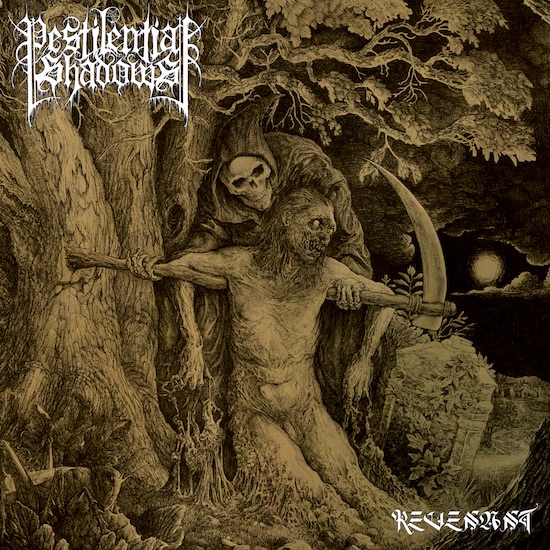 When you get down to it, "black metal" can mostly be defined by a feeling - something otherworldly, mystical, dangerous as it is alluring. Some artists seem to harness this effortlessly, while others spend years (and even decades) in its pursuit but never create something that captures the spirit.

Pestilential Shadows have spent a majority of their career in obscurity (even by black metal standards), often overlooked for flashier, edgier bands in their area - Woods of Desolation, Austere, Destroyer 666 and even Drowning The Light get mentioned more frequently in conversations than this group of Aussies ever does. Want proof? Pestilential Shadows formed in 2003, and this is their sixth full-length album since then. Bet you didn't know that. Another little known fact is that they're a part of what appears to be a loose association between black metal artists in Australia (known as the Order of the Black Serpent). The least known fact of all, though, is that Pestilential Shadows are leagues better than any other music that came out of that collective - and I know this without having heard half the bands associated with it.

It does make sense that this band isn't especially hyped: they're not flashy. Pestilential Shadows aren't big on walking guitar leads, cacophonous intensity, or extending the scope of black metal into bizarre, avant-garde areas. They like uncomplicated but effective songs, with riffs that have just enough going on to evoke imagery, carrying the song forward as much as they need to. On the surface, this is just another black metal album with some distant sonic connection to the more depressive side of things a la Woods of Desolation. Then, you notice how the rhythm section in particular is really clean, and how its tasteful groove gives this a completely different impact.

I haven't heard this kind of almost...bouncy cadence to black metal before, but it evokes the true black metal vibe almost effortlessly. This doesn't sound anything like a second wave band, but the end feeling is the same if that makes sense. Revenant taps into that small area at the base of your spine that makes you tingle, grabs a firm hold and stays right there through the rise and fall of several tracks. Though the riffs are simple, there isn't a single boring part and even the most minimal moments on this release are carefully crafted. The bass tone is absolutely perfect. You can't even understand how much bass gets neglected in this style until you hear the harmony in 'Procession Of Souls' when the mid paced part kicks in. It rounds out the melodies to give them the impact they need, carrying them to even further heights by grounding them with a warm tone. Without fail, that part gives me frisson and gets my head nodding every time, and there's several more moments like that throughout Revenant to enjoy.