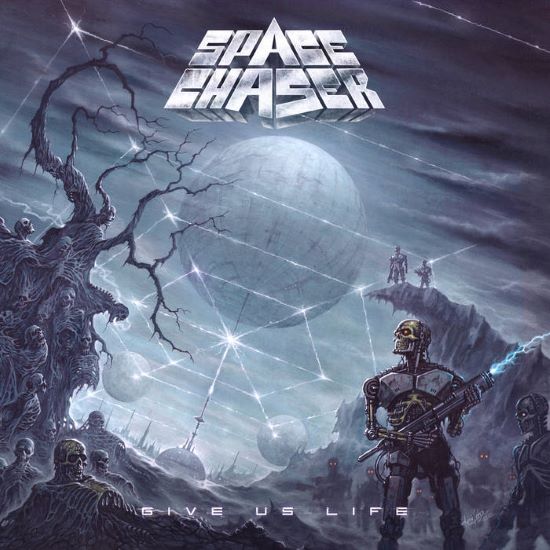 My grandmother gave birth to my mother. My mother gifted me with life. Okay, that's probably not entirely surprising. But somehow you have to start a review of an album called Give Us Life.

Space Chaser present their third full disc. Since the split with the meanwhile renegade Dutchmen of Distillator, not much has changed in terms of style. The gentlemen play thrash with a technical touch, without putting the technique above the flow of the individual songs. Nevertheless, the one or other track goes down the drain. The opener is acceptable, but completely unspectacular. It can't justify its prominent position in any way, since it lacks outstanding riffs and effective hooks. 'Antidote To Order' tends towards total failure, but fortunately this is the exception to the rule. For the majority of the time, clean, well-structured thrash is offered here, which does not lack musical substance. Individual parts and songs stand out. 'Cryoshock', for example, starts extremely promising and indeed develops into one of the highlights of the album.

In the review of the split I wrote that singer Siegfried sounds like the younger brother of Overkill's Bobby. That's still true - but it's starting to get on my nerves. These are vocals that don't really fit well on an almost pure thrash record. This is especially true when Siegfried lets Iron Angel's Dirk Schröder shine through in between - but unfortunately only the Schröder in poser mode of "Winds Of War". The partly half-baked vocal melodies, as far as one can speak of them, cost the album some plus points. This is especially true because Siegfried's voice also sounds quite thin (in the high pitches) or pressed on more occasions. Nothing against the gentleman personally, but I think singing and music style just don't fit together here in the long run. He simply lacks the necessary rough organ. Thus, tracks like 'The Immortals' with its arrow-fast guitars unfortunately do not unfold the maximum effect.

After all: Space Chaser mix modern and (fortunately mostly) traditional elements of the style in a mostly competent way. Not only a song like 'Burn Them All' would suit many competitors well. 'Juggernaut' can rely on its sharp riff, and the comparatively overlong closer shines with surprising twists and turns. The band doesn't lack dynamics and energy either, and I don't want to deny the personal integrity of any of the musicians. The clear, modern and direct sound additionally protects the listener from unpleasant surprises regarding the staging of the songs.

Nevertheless, a slightly bland aftertaste remains. More would have been possible on Give Us Life. But that's just my opinion. Everyone is right here, who wants to get his thrash served similar to an Overkill or Anthrax song (at "Spreading The Disease" times). All others will mainly enjoy the parts of the disc where Space Chaser increase tempo and intensity. Otherwise, there is nothing to say. Or wait, one more thing: I hope my daughter gives birth to a child someday and makes me a proud grandpa.

Sci-fi crossover thrashers Space Chaser from the German capital are back on the intergalactic metal stage with their third album Give Us Life. First of all, it should be noted that the quintet has found a new home planet called Metal Blade Records, which is guaranteed to make them more known (and possibly popular) than they have been until now.

Apart from that, the cover style of the guys has changed significantly. While the first two albums were more in comic style, here you can find a really lovingly designed cover, which reminds you of a mixture of Star Trek and Terminator. The cover was designed by Mario Lopez, who was also responsible for cover designs of Evil Invaders, Them, Killing or Skeletal Remains.

Musically the guys around singer Siegfried walk on similar paths as on the two previous albums. However, I have the impression that the playfulness has given way to a certain seriousness and also greater independence. While there were many Slayer and Iron Maiden influences on the previous albums (not least because of Siegfried's Bruce Dickinson-like voice), I feel that Space Chaser are playing more brutal than before. Amount of guitar solos have been reduced significantly and the riffing reminds of death metal in places (just listen to 'The Immortals'). Space Chaser can't deny their roots and the first lines of Give Us Life should be sung along with the lyrics of Slayer's "Postmortem", I'm pretty sure that fits very well. Besides the two already mentioned songs, other outstanding tracks are 'Antidote To Order', a fast song with cool gang shouts and brutal riffing, 'Remnants Of Technology' which is a thrash wrecking ball (be sure to check the video for it, very cool design, you feel like a guest on Mos Eisley) and also 'A.O.A.' knows how to convince with its brutality. 'Burn Them All' starts quite cross-over-like, but in the further course of the playing time it turns into a very melodic track with cross-references to old Megadeth, ("Rust In Peace" sends its regards - thematically it fits wonderfully).

Give Us Life is produced with much more powerful sound than the two previous albums and will leave no thrasher's ear disappointed. The whole thing was produced by Jan Oberg at Hidden Planet in Berlin, together with Space Chasers drummer Matthias Scheurer and guitarist Leo Schacht. The final polish was done by none other than Dan Swanö.

The Berliners have composed a very strong album, which comes across very entertaining and its unfortunate that it ends in just under 40 minutes. I think that with this album and the help of their new (bigger) label Space Chaser will make themselves heard. I can only recommend everyone who likes thrash metal to listen to this album as for me it is one of the thrash highlights of 2021 right next to the new Killing.

May the Force be with you - The truth is out there!!!