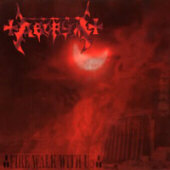 Fire Walk With Us is very nearly two decades old, but has lost none of the otherworldly brilliance that originally entranced me on release in 2001. The turn of the century was a curious time for black metal; a maturing audience tiring a little of the orthodox second-wave Scandinavian sounds of the key progenitors, and some of the bands themselves reflecting this desire to push the genre into new spaces. Pivotal bands such as Dodheimsgard, Arcturus and Satyricon were at the forefront of this movement, combining external influences such as drum ‘n’ bass, folk and psychedelia with a molten core of black metal riffing to forge ever more left hand paths of extremity.

Aborym’s debut, Kali Yuga Bizarre, had flown somewhat under the radar, but with the aforementioned millennial zeitgeist in their favour, together with the symbolic presence on vocals of ex- (and once again current) Mayhem totem Attila Csihar, the Italians were perfectly positioned to deliver something that both encapsulated the time, and was simultaneously ageless in its embodiment of black metal old and new.

As the buzzsaw guitars of ‘Our Sentence’ immediately set the tone for the rest of the album, Aborym ingeniously deliver the cold, ravishing grimness that one would ordinarily associate with frostbitten black metal, but via the industrial, mechanised feel of the frozen electronics that enhance merge seamlessly with blasting riffing, at times recalling Thorns, in all their discordant majesty. ‘Love The Death As The Life’ falls further into the abyss, with drug-addled psychedelic metal giving way to thumping electronic beats. The grandiloquent title track forms the centrepiece of the album, with a symphonic breadth of sound generating a sense of awe and wonder not dissimilar to early Emperor. More impressive is that Aborym repeats the trick with the very next track, but with vastly different source material. ‘Here Is No God S.T.A.’ eliminates almost all traces of black metal, instead offering furious techno, but somehow preserving the spiritual core of everything that precedes it.

Finally, bringing the album full circle, prior to the ambient-electro outro of ‘Theta Paranoia’ is a monumental cover of Burzum’s ‘Det Som En Gang Var’. In many other bands’ hands, a version of such a pivotal work of the genre might sound trite and lacking in depth, but on Fire Walk With Us, it actually serves to unify and connect Aborym with the black metal masters that they both emulate and diverge from so substantially. Aborym’s version is quite simply staggering, maintaining and even accentuating the mesmerising repetition that made the original so essential.

Fire Walk With Us has lost none of its power since release. In contrast with the music that clearly inspired it, the album evokes a dread of majesty by taking the listener to the brink of the inward abyss, rather than by looking outward towards infinite nature. The inclusion of the inimitable wails and atonal moaning of Csihar’s vocals also serve to connect Aborym with their clear influences, but rather than standing in the shadows of giants, on this outstanding album. Aborym themselves become one.