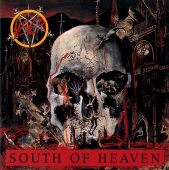 Honestly speaking, South Of Heaven was a disappointment. Back in 1988, it was really hard to accept this fact. Slayer had released three groundbreaking albums, supplemented by the fanatically blasting non-album jewel 'Chemical Warfare'. They were the absolute kings of thrash metal. From today's perspective, South Of Heaven marked the beginning of a slow but steady downfall. 30 years after the publication of Reign In Blood, the vast majority of thrash maniacs is still waiting for a worthy successor of this classic. Only a very few songs like the title track of their last album give hope for the future. What do you say? The terms "Slayer" and "future" do not fit together? Well, I guess that the self-declared experts discuss this topic very controversially.

As mentioned before, South Of Heaven was a disappointment - but this does not mean that it was a bad album. The menacingly swelling title track clarified the titanic power of well designed mid-tempo tracks once and for all. Its ominous main riff quickly became an icon of slow-moving thrash metal. No doubt, this track had the weight of more than 1.000 tons and it left a gargantuan impact, although it differed from the tracks of Reign In Blood significantly. However, it is relatively easy to write a great song, but it is difficult to compose ten songs of the same quality. Furthermore, comparatively clean vocals can work occasionally, but they are no silver bullet. Just check out 'Behind The Crooked Cross'. In terms of music, this title did not lack of fury and obsession, but Araya's disinterested vocals caused a very ambivalent impression. Nevertheless, the A side of the vinyl proved that Slayer were still able to pen exciting songs. 'Silent Scream' built the bridge to the previous works, 'Live Undead' scored with captivating riffs and its steadily growing level of intensity, 'Mandatory Suicide' offered an apocalyptic scenario, although it was - compared with the preceding eruptions - a rather undistinguished example of the compositional skills of the band. Anyway, one could not ignore a serious fact. The longer the album progressed, the more it became clear that it was not on a par with the first three full-lengths. The cardinal sin of the fourth output was the integration of the Judas cover version, at least from my point of view. To play a song of this fossilised dinosaur was like a very bad joke that gave me the feeling to listen to the following dialogue:

Thrash metal (with an awkward grin): "Hello traditional metal. So far, I hated you. That was the reason why I always wanted to be something different. But now I see that it can make sense to move into your direction every now and then. Commercial aspects, I do not need to emphasize it, do not play a role!"
Traditional metal (precocious): "My dear juvenile loudmouth, I don't understand. Explain to me how 'Silent Scream' and 'Dissident Aggressor' fit together."
Thrash metal (in a fit of pique): "Don't ask me. It doesn't matter."
Traditional metal: ... (speechless)

Did I already say that South Of Heaven was a disappointment? It failed to create this monolithic structure which had ennobled each and every of the first Slayer albums. One may explain this situation with the term "development". I don't agree. The first three albums also differed from each other in a remarkable way, but all of them were designed coherently. By contrast, the mixture of the heavyweight title track, the furious attacks like 'Silent Scream', the lame cover version and the desperate 'Spill The Blood' led to a torn and erratic overall appearance, at least to a certain extent. Apart from this surprisingly ill-defined approach, the tracks of the B side did not reach the exciting level for which the band was well known up till then. No, the songs did not reveal major flaws and yes, they had some good moments and well executed riffs. But any form of magic feeling was missing. Slayer had lost their godlike status from one second to the next. South Of Heaven was nothing else but a good album that could also have been written by many other bands. Well, the perfect production was still a kind of unique selling point, but this alone did not create a milestone. I don't intend to make a mountain out of a molehill. Anyway, Reign In Blood had been a utopian vision which had come true, South Of Heaven was a very profane product. Its slightly less brutal approach pointed in the wrong direction and gave cause for serious concerns. The worldwide Slayer community was getting nervous. Not without good reasons, as it was to turn out quickly.

This release was Slayer's 4th full-length studio effort. Though not as fast and speed oriented as their energized predecessor, Reign in Blood, the songwriting still showed a different approach by the band. Their tracks focused more on a slower and more diverse riff structure to them. The lineup consisted, once again, with Tom Araya on bass/vocals, Kerry King on guitars, Jeff Hanneman on guitars and Dave Lombardo on drums. These were the first founding 4 members. This lineup seemed to work the best for the band. They all reflected a more mature writing strategy, which focused more on constructing solid songs minus the craziness that occurred during the bulk of Reign in Blood. They slowed down to construct a solid, more mature release than on their previous 1980's releases.

Their genre still stays in the thrash metal category. That hasn't changed, only their musical focus was different. They seemed to show more catchy songs as opposed to a more blitzing array of riffs which were featured on their predecessor, Reign in Blood. Araya's vocal efforts were way less intense though there still were some screaming that he portrayed on the track, "Live Undead." With "Mandatory Suicide" there were some spoken parts near the end of the song. This wasn't featured on any of their previous 1980's releases, only on this one. Araya focused more on belting out contents that were mixed well with the music and were easier to understand. However, he seemed to lack some intensity to his outputs. It meshed better, because as was previously mentioned, they wanted to create a better constructed musical approach with this release.

The music contained crunch tone guitar riffs that seemed to accompany Araya's vocals more fluently. Tempos varied to some extent, but the guitars reflected a milder form of Slayer than on previous efforts. The music was wholly original and noteworthy. Songs such as the title track, "Silent Scream", "Live Undead", "Ghosts of War" and "Spill the Blood" were very catchy. Despite slowing down so much, these tracks carry with them an array of intriguing components. They still focused on an underground sound, which displayed the album's concept. Slayer's technical side of the riff-writing was shown on "Silent Scream", "Read Between The Lies" and "Spill the Blood." There was an actual clean tone introductory guitar piece during "Spill the Blood" which occurs towards the middle of the song. Something like that didn't accompany any of their past 1980's releases.

The production was solid and the mixing for each instrument came together well. Rick Rubin was, once again, involved on this end as well as the band. The playing, especially during the guitarists lead guitar works, were less technical than Hanneman's. If you look on the insert, it shows who the lead belonged to. This was mainly done because Hanneman didn't want the public to get confused and think that his leads were King's. He has stated this in previous interviews. Lombardo's drum efforts were phenomenal and was right on cue with the music. His playing was greatly conducted and quite technical. Not every track was entirely fast, however. Araya's bass guitar work was also right on top of the main rhythm guitar works.

Song contents focused more on warfare despite the album title. They were really intelligent and well thought out. The songs shied away from Satanism though they did contain some bits of anti-religion topics. They didn't form the bulk of writings. Though "Behind the Crooked Cross" steered away from warfare to reflect the downfall of religion. The bulk of their lyrical writings are a gimmick anyway. They're not professed Satanists. There is a cover song on here entitled "Dissident Aggressor." It was originally sung by Judas Priest. Slayer executed this cover very well and it fit well with the album's concept.

Even though Slayer's playing slowed down here, they still were able to concoct a solid and original form of writing to their songs. The music was quite memorable because of the unique guitar riff structures. They seem to get embedded easily into the listeners brain. The leads weren't as crazy as on Reign in Blood but that didn't take away from their wellness in execution. The band's overall playing demonstrated much talent. They focused on better conducted riff structures and time signatures much more so than with previous releases. This release was, by far, not stale or boring. A definite classic release by them which shouldn't be excluded in your Slayer discography. Worth picking up and it won't disappoint.