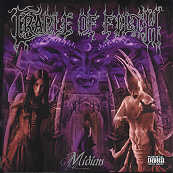 Almost an hour of vintage Cradle of Filth. The intensity, darkness, riff writing, vocals, and more deserve praise on this release. No song on here is lacking in any way as they put forth something so unequivical reflecting a bit upon their older work, but a little less intensity here though the music is surely the highlight. Atmospheric too and Dani's vocals are varied quite immensely. Not as high pitched as on Dusk...And Her Embrace, they are still good despite that fact. They didn't really slow down here, I think that the guitar reigns on this one. Almost as good as Dusk, but not quite there.

There are blast beats, intensely made guitar action seemed to be in D-tuning as it sounds like, and variety in the vocal work. It's one release by this band that really hits a hold of vengeance and unmerciful outputs. Something that's lacking in their later works, although their newest has featured mixed ratings. Restoring the edge of the extreme gothic metal scene, COF is domineering and merciless on Midian. They really belt out some of the most rad guitar riffs which fit perfect with the vocals. They are simply some of the most memorable guitar work on here that really packs a punch.

Never boring, never ceasing to amaze, COF really intrigues me in the best way possible. Most of the songs feature great rhythms and there is a heavy use of synthesizers that accompany the music. It really is a damn good extreme gothic metal release. An album that I could never get sick of hearing though there are parts where there is no guitar, just atmospheric synthesizers with Dani's high end vocals. Not as intense as Dusk, but the guitar still to me is quite original sounding. What I always look for in a band is the music itself. If it falls short on that measure, then the whole album suffers. Midian captivates me.

A lot of low end vocals spewing forth rigorous lyrical topics constructed by Dani alone. He doesn't lose his outstanding vocal duties with a nemesis here, he puts together an output that simply reigns. I'd say that there was a big use of the synthesizers here, but that's to create an atmosphere that simply dominates. It doesn't drown out the guitar work. It really augments it and fills it with something so irreperable. Midian to me is one of their greatest releases ever. The production simply reigns and all of the instruments here are well mixed in together and they all flow with magic.

If you want a kick ass COF album that in no way bores you or leaves you disappointed, then Midian is it. Simply captivating piece of work. Everything about the album to me is irreplaceable. So much atmosphere, doom and destruction in the music and to the listener's ear. It really hits home to me. If you dislike all of the synthesizers and low end vocals, forget all of that and just listen to how well they blend everything in together to make it an outstanding album. Nothing negative to say about this one, it really packs a punch in one's metal collection. Own it immediately!

After one of the most promising introductions I’ve ever heard, in ‘At the Gates of Midian’, in a black metal record I was really getting quite exciting, had Cradle of Filth suddenly become an awesome prospect in the metal world?? My questions were certainly answered comprehensively when ‘Cthulhu Dawn’ broke into chorus. ‘Cthulhu Dawn’ certainly had a lot to live up to in ‘At the Gates of Midian’ and unfortunately did not live up to them at all. And five tracks after ‘Cthulhu Dawn’ things were certainly looking bleak for “Midian”.

Finally and thankfully track number eight kicks in, ‘Her Ghost in the Fog’, is upon us and rewards one for persevering through six tracks of utter crap, with a spellbinding masterpiece. ‘Her Ghost in the Fog’ may well be one of Cradle of Filth’s most definitive moments musically. Dani’s vocals in conjunction with guest female vocalist, Sarah Jezebel Deva, are pure harmony and art in dark music. It is, for this track alone, that Cradle of Filth should employ her as the seventh member of their dark brethren. Sarah would add so much more diversity to a band that I feel is becoming tired and obsolete.

The musical input on “Midian” is very similar to Cradle of Filth’s last output, in “Cruelty and the Beast”, the normal over-the-top theatrical horror musings on the keyboards are readily heard through every song on “Midian” as was the case with “Cruelty and the Beast”. Those quality but uninspiring guitar riffs are heard consistently through “Midian” too. Nick Barker shifted camps to Dimmu Borgir for “Midian” and as a result, Cradle of Filth’s solid and illustrious drumming techniques heard through four albums will now become a closed chapter.