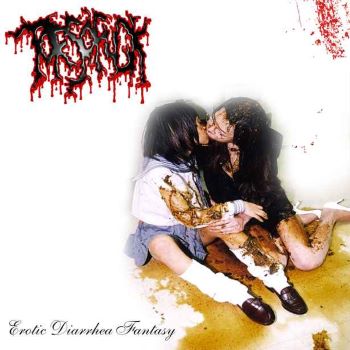 To describe this album in the most perfect way, it's just Mortician with nastier vocals, slam riffs thrown in, and more organized and cleaner guitar work. Some may not like this album, either because they think it's retarded pointless crap, or it's not as great as Mortician or something. But I don't really give a fuck what anybody says, this album is fucking awesome. To some, this album is a giant fart. To me, it's greatness.

You can’t go wrong with the name and title, there's just something I love a lot about the cover and name of the album, it's cool. I like it. It fits the sound of the music too honestly, especially since this is part goregrind and slam. I like how it's a simpler cover, but it's used gratefully. The cover truly does describe the album's name, and the colors and design of the logo make it even more aesthetically pleasing. It looks so awesome and is pretty straight up as well.

The guitars are super distorted and grindy, which refers to the goregrind part of them. Pretty reminiscent of Mortician, but Torsofuck does it in their own way which I can't necessarily describe. It's distorted, yet also very grindy. Sounds like literal electricity if it were an instrument, if that makes any sense. It sounds like if a heavily down tuned + distorted guitar was played through a fan. That's the best way I could describe the sound of the guitar on this album. I really really like the guitars. They sound so pleasing and just fucking AWESOME. On top of having a cool sound, they're pretty organized and keep a good flow so it doesn't get boring or repetitive. As well has having a brutal death metal-orientated style with a grind guitar sound, they put slams in here as well. After all the fast grinding, they'll slow down for a second and play a few slams and then go back to the brutality, or they may play a specific pattern followed by slams at the end or beginning of it. Heck, sometimes (very little, though) there will be sections with little melodies. This album truly as it all even though the sound of the guitar has a restrictive feel. The guitars are definitely the biggest and most important factor of the album, as well as what makes it so great.

In most albums like these you'd probably never hear the bass or pay attention to it, but the bass has a voice of its own on here. The extreme distorted guitar may steal the light from everything else, but the bassist manages to make his part hearable as well. On some songs you can hear the bass alone for a few seconds, and it's fucking hot. It has such an awesome and present sound, doesn't sound muddy or any of that crap. The bass is strong on this and has a satisfying sound.

Some may not like the drum machine, I'm not a giant fan of drum machines that are more on the obviously fake-sounding side, but the drum machine works in the best way here. Like I said previously, this album is part grind, and about half the time, computerized drums are used in the genre. On an album like Erotic Diarrhea Fantasy, it just FITS. Everything else is played fast and in a ridiculous manner, so the drums should follow. The snare has its own sound, it's poppy and solid as hell, you'll remember how it sounds for the rest of your life once you hear it. I'm glad it sounds the way it does, it's really satisfying when blasts beats are being played, or when there's the extremely sudden snare rolls. The snare drum being dominant and making sure you're aware of its existence is what makes me love how it sounds on this record, even more than I already do. The kick drum sounds pretty real, actually. It does have a refined feel since it's a computer, but at the same time, it's solid, heavy, and thumpy. It doesn't sound over-exaggerated or annoying/tiring, especially when the drums are fast as hell. This is a great example of how computerized drums should sound and be executed, depending on the sound of the album too, of course. I don't have anything bad to say at all about the drums. Along with the iconic + defiant guitar sound, the drums further enhance why this album is so great. It is its own thing. Simply just awesome and punishing.

The vocals are great, they have more of a goregrind style sound. They consist of guttural gurgle growls that purr and drag out. Pretty much like if a cat did some nasty gutturals while purring and screeched softly simultaneously. Sounds like burping but with lots of edge and spice to it. It's nasty and disgusting. This is how I like my vocals to sound, and they also fit the album's aesthetic too. Grind vibes + gross and retarded vocals = perfection.

All the songs are great, none are boring. The songwriting is awesome. Fast and relentless grind riffing, drums with slight technicality and straightforward consistency, and the extremely catchy patterns that hook you in and will keep you focused until the album ends. Songs like 'Fistfucking Her Decomposed Cadaver' is a great example of the awesome songwriting. It has a groovy and awesome pattern that follows a skank beat, and then it all stops, the guitar plays some slams, then the relentless brutality begins; the blast beats, the "not-giving-a-fuck" fast grind riffing, it's just so goddamn GOOD and CATCHY. Every song has something that's self-defiant about it. This record is super catchy, simple as that.

Sure, it has a handful of samples. The complete length of this album is 30:18, and if you take out all the samples it goes down to 18:57. That's a pretty drastic drop, especially since that's nearly half the length of the album, so it's almost half music, half samples. Although this may be a demeaning factor, it's entirely excusable, for me at least. The samples themselves aren't bad, they're not THAT long, the only issue I have with a sample is in the first track because it takes forever to start the song. But yeah, in my eyes, this aspect is totally worthless, and nothing to worry nor care about. The music is great. There may be nearly the same about of samples as actual music, but it's whatever.

I honestly don't have anything negative to say or think about this album at all. It may not be the most amazing thing ever, but it's extremely catchy, groovy, and grindy; and will indeed make you excited, headbang, and air guitar when you hear it. I fucking love this album. Erotic Diarrhea Fantasy is a badass release. It has a simple blueprint, but it's executed so greatly. It's truly a fucking masterpiece. What an awesome album! If you like brutal death metal, slam, goregrind/grind, or anything else like that, you may like this album (and band); because they mix those three in an awesome way! This album is definitely one of my favorites. This is a true underground beauty. I wish they hadn't split up though, we very much need more stuff by them, and more stuff like this in general too.

The album gets better and better the more you listen, I guarantee it. I've slowly been getting into this band these past few months, and now I absolutely love it! I've heard this album in full before several times, but I didn't 100% appreciate and adore it the way I currently do. I'm glad I love these guys now. I'm addicted to this. Others can feel however they want to about this album, but to me; this is awesome and forever will be awesome. Torsofuck produces excellency and brutality!!!

But this was no ordinary band at all.

The drums in this album are all made with a drum machine, yet they are made so perfectly that you think that someone is behind the drums (although there are some songs where the drumming is obviously programmed). The guitars are really down tuned, almost like in a porngrind band (main reason why this band has been qualified as porngrind in many blogs), but instead of sounding like the typical porngrind band, it sounds more technical that many goregrind bands, making some complex riffs in most of the tracks. The bass player is not a newbie, in fact, he is astounding. In all the tracks, the bass can be heard really loud, and it has some solo parts, demonstrating that this band was worried to show that the bass player was there (unlike the debut album of Waking The Cadaver). The vocals where something new I heard back then. I thought this guy used some effect or that where modified with a computer, but no, those where completely natural vocals, and where the most lower, insanely, undecipherable vocals I heard.

The lyrics are mostly about feces, sexual depravations, gore and things like that, but the vocals are so low that is almost impossible to follow the song with the lyrics, which is a shame because many of us (fans of Torsofuck) would like to follow 'Raped By Elephants' along with the lyrics.

Although this album is amazing, there is one thing many of us listeners of this album hate. The samples. I mean, it's ok to put some samples before the song starts (or at the end of the song), and usually these sample are short, but Torsofuck used samples really long in some of their songs, the most notorious is 'Cannibal', in which the samples are put before the song and in the end of it, and the song without samples doesn't last more than 2 minutes, 'Mutilated For Sexual Purposes' is another example of a bad use of samples in this album.

Overall, Torsofuck stands along some other brutal bands like Guttural Secrete, Septicemia, Infant Bile and others. Search this album if you wanna hear something extremely brutal with non-modified vocals, I assure you that you won't be disappointed.