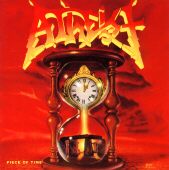 When it comes to all forms of technical and progressive death metal, from the spastic brutality of a modern day Archspire or the warm, clean sounds of Descent, these two very differing sounds can all harken back to one pioneering prog/tech death band - their name? Atheist.

Yes, formerly known as R.A.V.A.G.E. in the early to mid 1980s, Atheist is widely accepted to be the first band to blend progressive rock influences with the brutality of death metal. They aren't the first metal band to do so; Watchtower, Coroner and Voivod to name a few got headstarts in the mid 80s, albeit blending the prog elements with more heavy/thrash metal.

This here in 1989 is their debut album, Piece of Time and on it slays indeed. It is a very musically impressive, warping mass of riffs, solos and drum fills that beats the listener down with thrash-like intensity. It is, despite its technicality, extremely abrasive. Tech/prog death bands tend to let their complexity diminish the ferocity of their music a lot. This has always been what makes Atheist my favorite; that rage, that fury, that aggressive passion that comes with early death/thrash is on full display on their first two records, both a magnificent combination of bounce, brutality and virtuosity. I'd say Piece of Time is definitely more unhinged and raw when compared to Unquestionable Presence, but it doesn't deter really any from the listening experience - it is its own beast, and really shouldn't be compared to the next album.

Honestly, if you just enjoy thrash or death metal, there isn't any reason you wouldn't enjoy this album. It's surely technical, and would throw a more casual listener for a few twists and turns, but it's definitely far from inaccessible, and that's what makes it so good. It's raw, simple and it just works well for what it is. It's tech death in its most caveman form.

I'd say most, if not, ALL, death metal fans should listen to Atheist, they grew up in the same place, knew the same guys and even INSPIRED Death. So… yeah. They're one of the top 5 most important death metal bands ever and you'd be doing yourself a disservice if you haven't heard either of their opuses. Of course the second one is my favorite album of all time, but that's for another day. Their third album is a step down in quality, unfortunately not because of circumstances the band really had much control over, but it is what it is. They split up, reformed and put out an album in 2010 which… no.