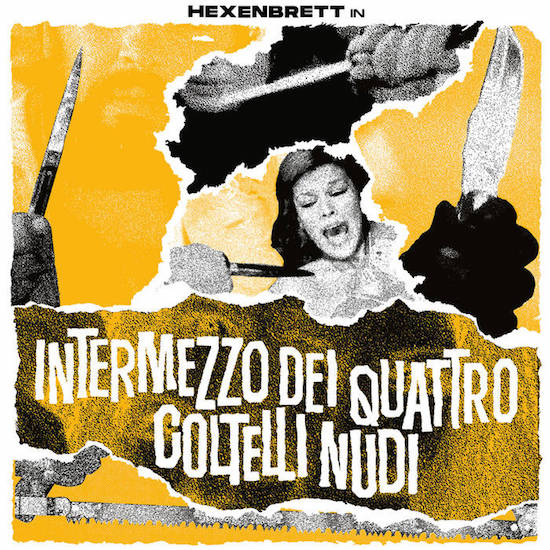 Need some nonsense? Here you go! This Intermezzo appears under the name Hexenbrett, but the two minds under this banner did not actively participate in its creation. Logical. But of course, everything was created "under the watchful eyes and ears of the clandestine couple". Well then....

Apart from this strange side effect, Intermezzo... has great potential - but only to disappear into oblivion relatively quickly. If you need a song by the Misfits, it's probably best to buy a record by them and not listen to the boring cover version of this Hexenbrett substitute band. Almost superfluous to mention that 'Return Of The Fly' does not fit to Hexenbrett in any way, even if the label likes to praise their stylistic breadth. To complete the disaster: Dee Dee Ramone (R.I.P.) would have composed a more exciting piece even on a bad day. After this piece of garbage comes a kind of sound collage, the meaning of which escapes me. If this is supposed to evoke some form of horror, all I can say is that I get less creeped out than I do when I listen to the tenth King Diamond concept record on the terrace in the summer morning in bright sunshine. Somebody is beating on congas or bongos and a disturbed piano player, or a guitarist guided by body-damaging substances is trying to play interesting sequences of notes - in vain. Thus, half of this release is simply superfluous.

'Sadist', on the other hand, bears the morbid signature of the true Hexenbrett. Here is a good mix of vile vocals, thrashing speed orgies and well-tempered midtempo riffs. This also makes good sense considering the clear and punchy production. Moreover, it builds a bridge to the songs of Erste Beschwörung. The opener can also be identified, at least during the promising beginning, as a Hexenbrett song. Here, too, the manic vocals know to convince, but the trumpet at the end is annoying. In addition, the break after the first chorus does not really fit into the structure of the track. After all, the song has a lot to offer, including Spanish guitars and weird background vocals. You can listen to it when your girlfriend has stood you up again.

Lastly, in case anyone does not like this review, I would like to point out right now that it was not written by me, but by my pet. It was merely written "under the watchful eyes and ears of the clandestine Felix". Oh my God...