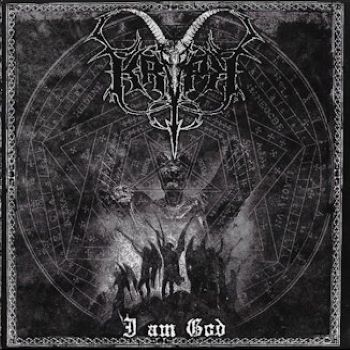 Krypt, a band formed after Tsjuder's split-up, released this two-track EP a year after its formation. Now, if you have heard Tsjuder, you may be thinking that this EP is the same as Tsjuder's releases, but no. This is completely different to that band, Nag and Desecrator really wanted to do something different, and they scored!

First track, 'I Am God', starts with Nag saying "I Am... God!" and then the song starts, a really catchy rhythm, until the low part comes, when Nag says, "I Am Death, I'm Unholy, I Am Blasphemy, I Am God!", and we come back to the same rhythm that was in the beginning of the song. This song is really repetitive in rhythm (as many black metal songs) but still, is really good.

Second track, 'Jeg Hater Deg' (Norwegian for 'I Hate You' is the best, a song completely spoken in Norwegian, with an initial double scream that comes along with the fast guitars and drums, it repeats for quite a long time, until Nag screams, then the song goes a little slow, with some notes played by the guitars in a keyboard style, after some seconds the song goes even slower, and Nag sings "Jeg Hater Deg, Dra til helvete, Jeg Hater Deg, Parasitt, dø!" then the song starts like in the beginning again. The end of this song is composed of a church bell ringing and Nag screaming in Norwegian.

Although this band consists of members of Tsjuder, and the sound is clearly like that band, it doesn't mean that this is "Tsjuder II", in fact it doesn't sound like Tsjuder (at all). Besides, if you already heard the album Preludes To Death, I suggest (in case you haven't) that you hear this as well, since these tracks are really different (mainly vocally) that the ones in the album.

Despite the fact that is really repetitive, this EP is really good, if you liked Nargaroth's "Black Metal Ist Krieg", you would enjoy this as I did.