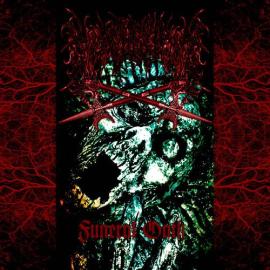 (Edit: by the time I wrote this review, I had only heard the songs without paying really attention to the music, now I heard them carefully and will correct some things that were missed)

One of the most known Christian bands is Mortification, but if I had to put a band to fight it, it would definitely be this one, the unblack metal solo project SorrowStorrm. Created by the same man who gave birth to Encryptor, as well as participating on many other Christian bands. This EP, not too short in length, has a sound with better quality and more worked in vocals than what was seen in its debut album Caverns Of Grief. I'm not Christian, and I don't like the Christian bands that only speak about praising Jesus. I fact, I don't like Christian metal at all, but SorrowStorm is a powerful band, and I respect Ogrvst for it and Encryptor. But let's see how good the EP is.

The first track 'Cursed Fires Of Gehenna', starts with a drum and guitars intro, then comes a scream and the song changes to a fast tempo and keeps it a long time, combining shrieks, double voices and growls (and are very well done), then the song changes again to a very slow rhythm and a scream is thrown, and keeps the slow tempo while Ogrvst recites with shrieks, and so goes the song 'till the song gets really slow in the end, with great (if somewhat terrifying) screams.

Second track 'Occult Moon' starts with a little scream and fast drums, and starts to sing with shrieks and uses a double voice in a part of the song, while the song keeps fast, he uses again the double voice but this time with two screams, and so the song continues until the song changes to a slow tempo with skilled drums, and then changes to fast again, and so keeps the song 'till the end, when he starts reciting "The pain, let it end, binding spells will lead your being astray!, in this part the songs goes on a slow tempo. Then he repeats the phrase Satan Live to Rule His Realm!!, until the song ends.

Vocally, it uses high shrieks which he combines with deep growls, creating a unique voice. The guitars and drums are very well ordered, and not like other one-man bands which record them and then are disordered (and that's really bothering). Sometimes is a little hard to believe that Ogrvst made this all by himself, but he did this and many people like and respect this work. Ogrvst himself said (in an interview) that his works are respected even by the anti-Christians, and with good reasons, obviously this band cannot be compared with famous black metal bands like Krypt, Tsjuder, Nargaroth and Beherit, but he did the best he could to create a black metal band to send the word of God.

Overall, I recommend this work to those who like black (or unblack) metal, since it's a very well worked EP. Whether you listen or like Christian metal or not, this is a good option to hear. If you like Horde, Antestor and that type of bands, then this is for you.