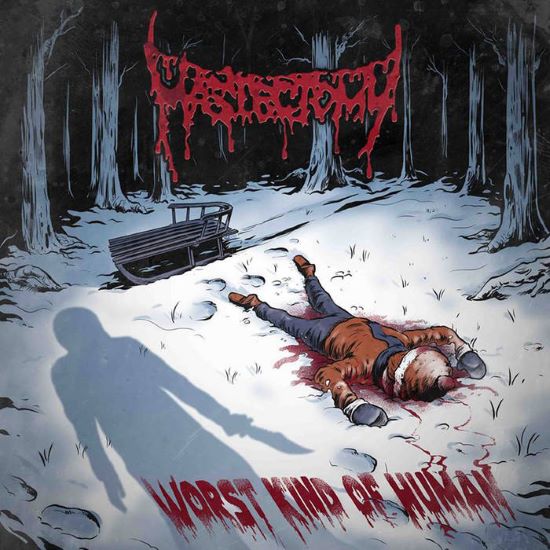 I have a soft spot for one-man brutal death metal acts. I can't explain it exactly, but that whole "Sod you, I'll just do it myself then!" attitude speaks to me. While searching for these kinds of acts I bumped into this Polish dude who looked like Mr. Buzzcut from Beavis and Butthead wrapped in a Mortician shirt. Speaks for itself I had to check this out, and I was not disappointed.

In its totality you could compare Mastectomy with a band like Putrid Pile, but I hear some subtle influences of bands like Behemoth or Belphegor seeping through as well. The thing that caught my attention was the amount of variation in the songs. There are tempo-changes and breaks aplenty to be found here, and the individual tracks are well thought-out and put together. The down-tuned riffing is simple but very effective, and the songs stay interesting throughout the duration of this album, maintaining a good balance between groove and pummeling aggression. I really dig the vocals here, with sole member Adam Novak employing a gruffer, more throaty approach to his grunting instead of the gurgled gutturals that usually go with the style. All these elements are held together by a good production in which all the different instruments come out clearly and have power oozing out of the wazoo like mad. Even the programmed drums don't annoy me, which is testament to the quality of this release. I would like to make a special mention of the track 'Murder Solves Everything', that combines brutal death metal with haunting guitar sounds, establishing a heavy yet atmospheric mood that I have seldom heard on other releases of the kind.

It's not all roses, hugs and kisses though. This release has a butt-load of spoken samples on it, something that annoys me pretty quickly on other releases, and it does so here as well. A fair few of them are in Polish, and even if I worked with quite some Polish people throughout the years, the only things I know in the language are profanity and dirty words, so I have no idea what's going on here. Still, this is about the only point of criticism I have on this beast of a release.

This is a very impressive album from an artist who is not afraid to look over the boundaries of the brutal death metal genre and do his own thing with it. I recommend this to all into brutal death, even if it may take a few listens to fully get into the album because of the significant number of breaks in the music, but once you're in, you won't get out. I am curious as to what the future is going to bring from Mastectomy.