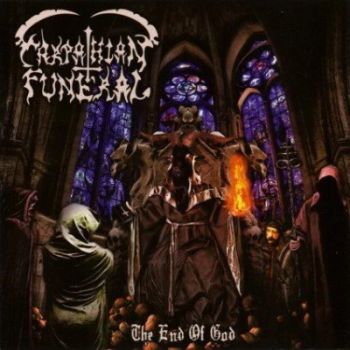 One thing is for sure here, they come out swinging right off the bat. There's no dilly-dallying to be found right after you press "play", Carpathian Funeral just fly directly at your throat with their brand of old-style US death metal. Don't you just love that approach? I certainly do.

Their brand of death metal isn't the most original, but it ticks all the right boxes for me. It oozes aggression and feels and sounds familiar right from the start. Their style is pretty straight-forward in its execution: no unnecessary frills or technical wanking, just sturdy death metal in the old tradition of "Vile" era Cannibal Corpse crossed with early Deicide, with the occasional Slayer riff thrown in for good measure. In their mid-tempo sections, the guitar work takes on an older school death metal feel, bringing to mind the earliest works of Gorefest, Massacre and Morgoth. Vocalist Mark Conway had me thinking of George Fisher of Cannibal Corpse, with his throaty grunts and furious screams which complement the aggressive riffing perfectly. This is music for all those who miss the death metal sound of the mid to late 90's. No mess, no fuss, just death metal goodness.

The production leaves some to be desired unfortunately. Where the guitars and vocals sound absolutely menacing, the digital percussion sounds boxy and compressed and hinders the music from really blowing up. The total picture does not sound bad or so, it just sounds ... too nice. And too nice is not what you want from men who have their kids' mothers listed in the "fuck you" part of their thanks list. If the drums would've had more of an organic sound, this would have added more menace to their already volatile mix.

This is a sturdy death metal release that is rooted firmly in the latter half of the 90's. It is aggressive and well-executed, even if the production is kinda lacking in the total picture. Despite its minor flaws I can imagine the older death metal maniac having good use for this album. And before I forget: cool artwork as well, by the way.