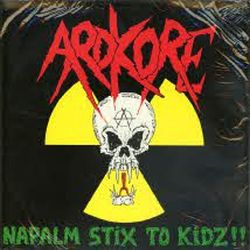 I found this little ditty in a secondhand vinyl shop somewhere in the late 90's. I had never heard of this lot, but the symbol for radioactivity and crappy drawn skull on the cover tickled my curiosity just right. The pictures on the sleeve had a bunch of scruffy looking dudes with Cro-Mags, The Exploited and Holy Moses shirts, and that sealed the deal for me. Hell, their vocalist is a mohawk wielding punk, so I was pretty sure this wasn't going to sound like Foreigner.

And boy, it did not disappoint. Even more: this is one of my favorite thrash LP's coming from the UK. Ardkore come out swinging with the album opener 'Half Life', a raging offering of manic hardcore thrash, that immediately sets the mood for what's to come. The music is kept up-tempo for the bulk of the album, with a pounding percussive assault laying the perfect foundation for the raging wall of noise the guitarists pull up. In style they remind me of later aggressive thrash bands like Messiah, Slaughter, Protector and even some Destuction, but with a copious amount of hardcore punk injected. Next to the scathing thrash metal Ardkore have on offer, I definitely hear the influence of 80's acts like Final Conflict, Ripcord, Siege or Cryptic Slaughter. Vocalist Scott Pope, the mohawk dude, comes from the punk school of vocalists (much to nobody's surprise, probably), employing a gruff delivery in line with the vocalists of The Exploited, Extreme Noise Terror and Concrete Sox, which complements the manic sonic assault exquisitely, but at the same time I can imagine more picky ears perhaps might have some difficulties with his style. It is your typical punk/thrash bark that leaves no room for vocal acrobatics, but for me it works really well within the frame of the music. As mentioned before, the band speed through their songs, making the 16 tracks just fly by. Just like a good hardcore thrash album should. This stuff gets my blood pumping, alright!

Napalm Stix To Kidz!! is an album that may be a tad too gruff and unpolished for those into the more Bay Area style of thrash, but it comes highly recommended to those into stuff like Wehrmacht, Righteous Pigs, Inhuman Conditions, and the bands mentioned above (except Foreigner, of course). Those into the rougher German thrashers could find something of worth here as well, I'm sure, and I'd even recommend it to those into crust like Doom, Anti-Cimex and Genocide SS.

How's that for crossover appeal, eh?