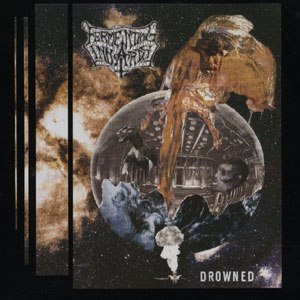 Fermenting Innards has quite the interesting history. The band's moniker comes from an old Carcass song, and as you may have suspected they started life as a death metal band, ending up as a full-on black metal band on their only full length Myst. Before that shift there was this EP though, so let us take a gander at what is up with all that.

The music on offer here is still firmly rooted in death metal. Carcass has been an especially big influence: the band has the alternating rasping and gurgling vocal styles, the varied faster and slower parts, but that influence is especially clear in the riffing and guitar tone. From the sound of it, albums like "Symphonies Of Sickness" and "Necroticism ..." have been vital in creating Fermenting Innards' sound, but it has to be said that the band also has some Swedish characteristics as well. Not as pronounced as the Carcass influence, but I can hear some traces of early Dismember, Wombbath or Excruciate in the riffing, primarily on the first two tracks on this EP. It is on the third and fourth tracks that the band shows that they had their collective fingers firmly on the pulse of the underground back in those days, because in these they incorporate some doomier elements into the mix, a style pretty popular at the time. In the closing instrumental 'Eternal Sadness' the Paradise Lost influence is undeniable, even that title could have easily been on "Lost Paradise", but Anathema and My Dying Bride are not far off in the distance as well.

It has to be mentioned that playing is tight and that the music is well executed throughout, and this EP has all the right ingredients that made early 90's death metal great. It's got variation, good riffing, and I really dig that guitar sound, it's crunchy and heavy, complementing the no-nonsense death metal style to good effect. The production fits the music as a glove, giving this EP a sturdy sound, perfectly capturing that 90's spirit. It may not be the most original release on the block, but what it does, it does well.

So it was pretty surprising to see and hear that Fermenting Innards' next release saw a shift into total black metal territory, complete with corpsepaint and Mortiis performed atmospheric intro and outro. Was it an evolution, or were there more opportunistic reasons at play here? I don't really dare to say, but bands shifting styles in the mid 90's wasn't such a rare occurrence. Let's say Fermenting Innards weren't the only ones back then (Abominant, Hypocrisy and Deteriorate, I'm looking in your direction). Their Myst full length sure has its moments, but me personally, I prefer this EP and their death metal style. It's good, solid death metal with some traces of grindcore thrown in, and there's nothing wrong with that at all.