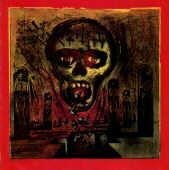 Let's come directly to the point: 'War Ensemble', the first detonation of the fifth full-length of Slayer, is massively inspired by their greatest classic. A relentless neckbreaker with a length of almost five minutes, frightening guitars at the beginning, a combination of furious eruptions and mid-paced parts and an atmosphere of martial brutality - all these traits seem to be derived from 'Angel Of Death'. But who has the power to resist his own success formula? Anyway, 'War Ensemble' presents itself as a vehement opener and it comes close to the murderous quintessence of Slayer's early works. No doubt, the originators of three of the best thrash albums of all times are still able to compose and implement fanatic tracks. Yet it is also a fact that the divine aura of their signature song remains unrivalled. 'Angel Of Death' is the original, 'War Ensemble' appears as the little brother with similar facial features. Thankfully, I like little brothers very much (my big sister takes a more differentiated view).

However, the most impressive artwork of Seasons In The Abyss is the title track which finishes the album. The riffing commutes between desperation and devastation, an unholy aura is omnipresent and despite or exactly because of the rather leisurely rocking mid-tempo rhythm, the song possesses the right amount of heaviness. The oriental opening, the fairly catchy chorus and the general structure of the track leave a major impact. I recommend to watch the official video on YouTube, because the pyramids, the Sphinx, the desert and the "strange" people intensify the atmosphere of the song in a significant manner. Just as South Of Heaven, the title track does not reveal the typical features of Slayer's first albums. However, this closer takes the album on a good level. Only a "good" level? Unfortunately, the answer is yes. I hate to say it, but not much happens between the opener and the title track.

Without question, the thrash kings of the eighties can rely on their huge potential and they are not yet infected with modern ideas. Therefore, Seasons In The Abyss does not insult the listener with half-baked songs. Yet one cannot ignore that a certain number of pieces lacks of captivating details. Too many mid-paced parts show up. Of course, the title track provides evidence that Slayer have more to offer than merciless velocity. Nevertheless, the raging speed attacks have established the reputation of the band. It is therefore slightly annoying that Araya and the rest of the gang don't give a damn about their past. The result is that tracks like 'Expendable Youth' or the anti-communistic 'Blood Red' fail to make my blood boil. Speed eruptions such as 'Hallowed Point' or 'Born Of Fire' are better, but it becomes clear that the adequate level of fury cannot be reached in view of the high number of mid-tempo breathers. The intensity of the first three albums has an intoxicating effect, but the here reviewed work spits on intensity, due to whatever reason. I don't say that the rather slow-moving creations lack of interesting riffs. In particular 'Skeletons Of Society' reveals a constantly rasping guitar work which constitutes the fundament for the good emergence of the song. But generally speaking, Hanneman's and King's compositions show unexpected variations in quality. In a nutshell, the eight songs between the opener and the closer are solid. No four-course menu, but also no cheap fast food. Some people say that 'Dead Skin Mask' stands out due to its gloomy aura and the concise main riff, but I don't share this point of view. It is just another good song.

Finally, the production cannot compete with those of the two predecessors. It goes without saying that it cannot be blamed for being blurred, thin or paltry. Yet the amazing degree of pressure and transparency is missing. This is a shame, because exactly this detail has ennobled both Reign In Blood and South Of Heaven, quite irrespective of the fact that their gargantuan third full-length has thousands of further advantages. With that said, let's face it. At the end of the day, it is sad but true: South Of Heaven has shown the first cracks - and after this initial sign of dilapidation, right here and right now the monument of Slayer begins to crumble at an alarming pace. Well, the band still does not drop below an acceptable level. Despite the absence of a diabolic aura, Seasons In The Abyss is - I repeat: it definitely is - a good record, but it hovers light years away from the quality of Slayer's Holy Trinity which began with 'Evil Has No Boundaries' and ended with 'Raining Blood'.

Throughout the years, the name Slayer has always meant one thing: dark, aggressive, Satanic metal! Anywhere in the world, wear a Slayer shirt and you’ll have a friend. With their fifth full-length album, the guys keep up the everlasting tradition of amazing albums. "Seasons..." proudly marks the point of perfection Slayer have reached in their career.

The opening shredder, 'War Ensemble', opens the bloody gates of war and unleashes total destruction on the listener. The amazing guitar duo, King and Hanneman, prove to the metal world who truly pulls the strings (of distortion). Amazing solos ('Born of Fire', 'Seasons in the Abyss') as well as riffs ('Spirit in Black', 'Dead Skin Mask') dominate the album. Tom Araya’s voice is as dismal and unfeeling as ever, and it only works to the music’s advantage. Dave Lombardo (a legend on the drums) doesn’t let up for a bit and perfectly adds violent structure to the songs with relentless double-bass drumming and lightning-speed fillers.

The production is the only low point here. Everything sounds dreary and lifeless, making some songs seem boring and monotone (especially the slower ones). Rick Rubin has been with the band since ’86 and has disappointed me on this release. Fast and Slayer’s traditionally violent songs like 'War Ensemble' lack the necessary energy and spirit needed for a ripping thrash tune. On the faster songs, some notes are buried in the muddy distorted sound.

The bands amazing talent, however, is not buried under the bad production. Certain songs benefit from the cold, unfeeling sound, like the eerie 'Dead Skin Mask' and even the epic title track. Not a masterpiece but certainly an excellent album that won’t disappoint even the most skeptic Slayer fan.

Bottom Line: A very solid album from the Kings of Thrash Metal.