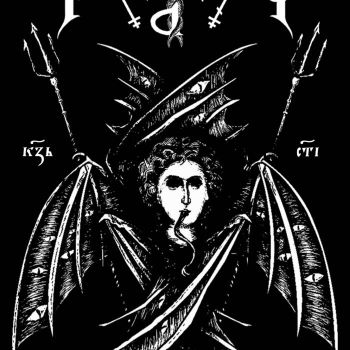 Believe it or not dear haters of modernity, but sometimes YouTube can make your life better. I made this experience. A good friend of mine recommended me to listen to Propast, a band from the deepest Serbian underground. They just published one EP (with a playtime of more than 30 minutes) during their existence so far. That’s not much for a band formed in 2007. However, in terms of quality, this release is almost a king. It shows definitely why the underground constitutes the most exciting biotope of the global metal scene. There is so much creativity, I am always amazed anew.

Propast play pure, fast black metal. Certainly, their EP is no feast for high fidelity lovers, but the relatively thin mix does not hurt the overall impression. Quite the opposite, the guys from the Serbian capital express the spirit of the genre by using exactly this approach. It is effective, misanthropic and characterized by its desire to reduce to the essentials. Moreover, the slightly flat guitars provide the perfect frame for the sporadic wolfish howls of the lead vocalist to shine in full glory.

The design of the guitar lines is pretty minimalistic, and they are often accompanied by the very present double bass. During the first, more or less calm part of 'Čeljad Kaljuge' the bass drums are almost too fast for the snare and the complete song. Nevertheless, the result sounds coherent, probably because of the fact that the musical approach goes hand in hand with the technical implementation. This is no frills black metal that reveals its hostile-to-mankind-soul right from the beginning. It is music one can listen and feel. It spreads an adequate atmosphere, and it has its own character.

The mighty intro and the intermezzo of the Graveland cover “Thurisaz” delivers the only pompous moments of an EP that does not want to be nominated for an originality award. It just wants to be an album for convinced black metal maniacs and it lives up to this intention. The singer (who is also responsible for bass and guitar, he seems to be multi-talented… I can’t even play the flute) deserves special merits. He sounds like a wounded and hunted animal. Inter alia this feature makes '…U Plamenu' and the other songs to something special, even though there is no typical Eastern component in the tracks. The compositions of Propast could also originate from France or from the UK. Anyway, this is just great music, not perfect or unique, but authentic, furious and performed with devilish heart and soul.