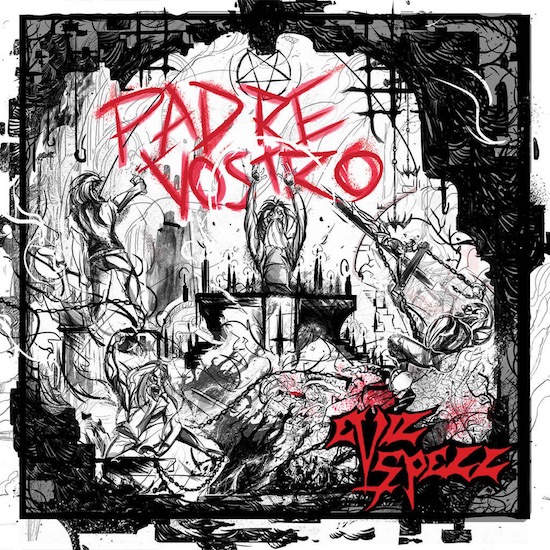 The only resources that will always be available for mankind are filth, waste and excrement. Wise guys as well as mega-brains profit from this situation. Mega-brains? Well, the promo pictures of Evilspell does not show four men who like typical university professors. Nevertheless, the Italians deal with dirt. Members of the global black thrash family have never been seen with thoroughly cleaned ears. But this four-piece does not even know the words “water” or “soap”. Never mind. The dudes are competent in their core competence – and nothing else matters. Wait a moment, there exists a song with the same name, right? Well, can’t remember the name of the band that played it. All these irrelevant combos… too numerous to keep them in mind.

Let’s get back to Evilspell. Padre Vostro is their third full-length and I must admit that the first two albums are still unknown to me. Thus, I can and must fully concentrate on the new material. The band knows the rules of its bastard style and so insanity and fury go hand in hand. Okay, there is a downer that hurts the flow of the album. 'Necrology', the delayed title track of their second long-player, marks a solo performance of an organ. Are we in church? If I want to listen to this form of music, I do not pick a black thrash CD from the shelf. (Aggravating the situation, this is not just an intermezzo, but a nearly opulent track with a length of almost four and a half minutes…) By contrast, the real title track of the album attacks with razor-sharp riffing, a solid portion of velocity and almost mentally disturbed vocals in the chorus. It’s an appropriate representative of the further material due to its straightness, directness and unfriendliness. Needless to say, it celebrates a no frills approach, because that’s almost an essential element when it comes to black thrash.

The energy of thrash gains the upper hand against any kind of black metal aura, but that’s no problem. (Sonic) torpedoes do not ask for atmosphere, they prefer to destroy without beating about the bush. The production underlines the dominance of thrash, because it avoids any form of lo-fi sounds. Instead, the well-defined mix is almost too clean for an album of this sub-genre. Either way, the album does not derail during the eight “normal” tracks. Okay, the Celtic Frost / early Sodom inspired breaks and riffs during the slow part of 'Pain' are not overly exciting, but usually the Italians have a fine instinct for effective riffs that drive the songs forward. Fans of Sure Assault will like this stylistically comparable work, although the songs do not reach the class of those on “Lust & Misery”. So, what it would be rather strange if any black thrashing record from Italy reaches perfection.

The friendly titled 'Evil Slaughter' is the last weapon of Evilspell and it is one of their best. This poisoned outburst of lowest instincts sets a big exclamation mark behind the other songs and marks the climax of the album (together with the title track). Long story short, I want more sounds from Italy! Baphomet’s Blood, where the hell are you? Surge Assault, wake up from your coma! Violentor and Bunker 66, we know that you don’t sleep, but you can do more as well! And Evilspell, don’t wait that long again to release the next work! There is so much filth, you just have to pick it up.