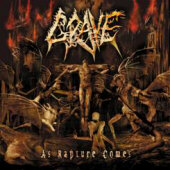 Well here's yet another album from Grave, another one of those bands that has a massive fanbase for seemingly no other reason than the fact that they were a death metal band from Sweden that released albums in the early 90s. I guess I can sort of understand the appeal, but even the album people consider to be their crowning achievement most of the time (Into The Grave) was one I've never been honestly able to praise really highly; don't get me wrong, I like Swedeath, any self-respecting metalhead probably should, but the other two big bands from that scene had something to offer that was all their own. Dismember had their strong sense of melody complimented with their razor-sharp tone that you can't really find anywhere else these days and Entombed was essentially rock music in death metal drag- done very well mind you. Grave seemed to almost be closer to the Floridian death metal scene in the sense that they opted instead to focus on blunt, bludgeoning brutality- not necessarily a bad path to take in principle, but not necessarily an original path, either. Although originality isn't everything, Grave kind of gets lost in the sea of death metal that was sprouting up at the time because of how common the style of death metal they play was at the time.

15-odd years later, Grave are still kicking with the death metal formula they've had since the late 80s, despite a few dangerous flirtations with groovier material in the mid 90s. At this point, one knows exactly what they're going to get from a Grave album- which is somewhat admirable in a way, consistency is something I really wish I could see more of in a metal genre plagued by bad flashy stylistic experimentation. However, since Grave really never carved their own individual niche to begin with and instead settled into familiar territory, a decade and a half later As Rapture Comes sounds ridiculously predictable and irrelevant.

A band that's been touring, writing and recording for the better part of 15 years certainly isn't going to sound crude or clunky, and Grave are certainly no exception. As Rapture Comes is an album executed with thorough class and professionalism; these guys are confident in their abilities and never sound unsure of what they're doing. They can go from midpaced grooving to faster bludgeoning to slower, more crushing sections without any of it sounding out of place. As Rapture Comes is a very efficient album in that sense; there's no unnecesary bullshit that draws the songs out for extended periods of time, riffs are never dwelt upon for too long and the album's actually fairly good at holding your attention- or at the very least, if you're familiar with the style, you're never going to feel actively irritated by anything going on here because everything about this has been tried and tested and crafted time and time again.

One thing that's fairly interesting about this album is that it's written like a Swedeath album at its core but seems to be slightly infused with elements from more modern death metal. The album has a very crisp, clean, loudness-war style production and the clarity of everything makes it bear similarity to some of the more blunt, brutish Unique Leader bands (the guitar tone especially) and there's a couple of cases where the band sounds more like the more recently formed bands that take influence from early Swedeath rather than a band that was there from the get-go. The punkish swagger that was very predominant in most early death metal has been completely eschewed at this point, leaving a core of pure, sterile death metal- the attitude has been completely stripped as well. Going back to the production, though, this is one of the very few instances where the Century Media style of making the waveform look like a brick actually helped give the album some energy- the riffs are thrust upon you with a little more force and have a sense of urgency, the vocals sound like they haven't waned too much with age- there's still some power in that rasp of his- and every bit of the drumming can be heard which is good, because now the listener is able to hear the accentuations the drums give the riffs that make completely uncatchy riffs stick in your head somewhat- something that may have not been possible without such high production values.

There's a big downside to that, however- when you put everything at the forefront of the album and fire everything right at the listener's face, all of the album's tricks are going to be revealed pretty fast. This is an album that sound full of ideas and great riffs on the first listen, but its quality deteriorates rapidly over time- on the second or third listen, there's nothing new to discover and the album becomes an exercise in boredom. This wouldn't be a bad thing if the album's surface characteristics were doing something that was worth putting on display, but unfrotunately everything on this album is safe, predictable and familiar, which is the downside of Grave's consistency. Every single last piece of music on here has been extracted, rearranged and repackaged from earlier albums and bands - when you put this album on, even if you have merely a cursory knowledge of the genre you'll feel like you've heard all these songs before. Sure, the album sounds confrontational and urgent on the first listen, but does it really keep up the tension down the road? Hell no. The amount of time you'll be able to endure this album is inversely proportional to the amount of spins you've spun it for. The problem isn't that Grave isn't doing anything new, it's that everything you hear on As Rapture Comes has been done faster, dirtier, or with heavier undertones by both bands that preceded them and bands that have followed.

As Rapture Comes is the is the final nail in the coffin. I'm sure there was a bit of excitement when Grave came back after their six-year delay with their old sound back in 2002, but this album pretty much confirms that Grave has absolutely nothing new to say. It's admirable that Grave has stayed true to their roots and refuse to diverge from the original formula; it's also kind of lame that they've put out yet another safe and predictable release in a genre that's already overcrowded with mediocrity to begin with. If you just can't get enough recycled Swedish death metal riffs stripped of most of the things that allow them to hold your attention over time, then you'll love this album, but you really don't need it, nor do you need the dozens of other albums that accomplish the exact same thing. In a world where death metal's already long evolved past albums like this, As Rapture Comes easily gets lost in the shuffle of the other half-dozen "neo-Grave albums" which all have virtually nothing to set them apart from one another. This is nothing more than an exercise in mediocrity, and quite frankly there's too much damn mediocrity these days.