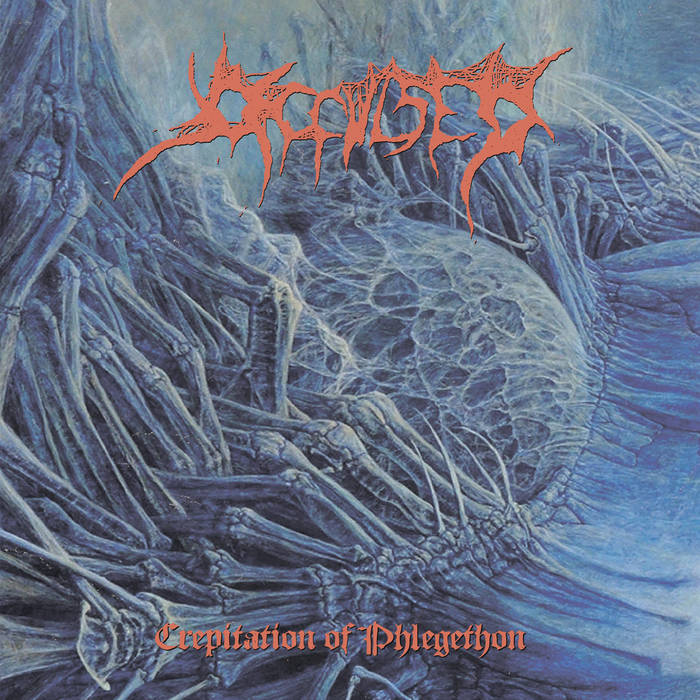 And its albums like these that make being a death metal supporter worthwhile. Occulsed emerged at a time in which I found myself asking the tedious question; why is it that if I have a higher preference for black metal, do I own and listen to more death metal at a 5:1 ratio? Crepitation Of Phlegethon answered my question with ease and that blurred line of uncertainty was made abundantly clear by the time I got through listening to 'Thou Butcherer Of Human Folly', 'Unction Of Muliebrous Broth' and 'Peryphlegethonic Mindflaying'.

Riffs scattered throughout the foul scented domain, technical blasting merges with a primitive hammering and the vocals sound of an ogre with a serpent tongue. Combined you get an album that resembles a combo of Hissing's "Permanent Destitution", Portal's "Swarth" or Seepia and some Incantation records plus an old school death metal unsheathe. That said, the riffs would have to be the dominant factor and more importantly, the best executed one; well, you got your wish. Justin Stubbs (Encoffination) had awoken his demons to summon upon us a bewildering display of unadulterated riffing recklessness. Is this what he was referring to by bringing out the red bish. If that's the case, I hope she stays out forever.

Apart from that, you have Jared Moran on drums that mind you is involved in 20+ other metal bands at the moment. Experience! Another necessity for executing something of such scholarly standards. The off key alterations in tempo and structure all the while playing to the wizard fingers of J.Stubbs, AMAZING. Alterations of mirrored maze-like compositions, an ant's nest of drum mechanics, mystique and esoteric in its structure, Jared delivers a spellbinding and serpentine showcase of drumming that feels like a task in its own attempting to unravel and follow.

Vocally impressive, as though being a malignant merge amongst John McEntee's chords, Justin Friday's (Ritual Necromancy) and The Curator's (Portal). They're not over mixed nor under mixed and compliment the scientific and multifaced sort of style the album features with so many changes occurring and diversions being inserted. These vocals sound like an experiment went wrong in an uncharted underground lab when trying to mix human DNA with that of multiple animals.

The technicality of this album is just mind boggling. Certain parts on here sound like the instruments were recorded in separate rooms then put together in no particular form with no direction in mind. Hence it sounds as if each musician is playing at his own timing and own rhythm on tracks such as 'Lurid Placeless Echoes' and 'The Soul's Admonishment'. Yet even more remarkable is the way they sort of reduce that lapse in timing as each instrumental note meets at a musical summit thus unifying the music.

This is what an effort of marvel and diligence sounds like; its only three musicians doing what would require a band of 6+ to do. The final product here speaks volumes about the dedication and drive of these musicians. One would like to see Occulsed go on to be a more focused project with follow-up releases but with the members being involved in other bands it's hard to see that happening, plus it's about time for a new Encoffination album. However, this bee's hive of death metal riffing will have to suffice for now and maybe the wizards in Occulsed would unleash another devastating album soon.