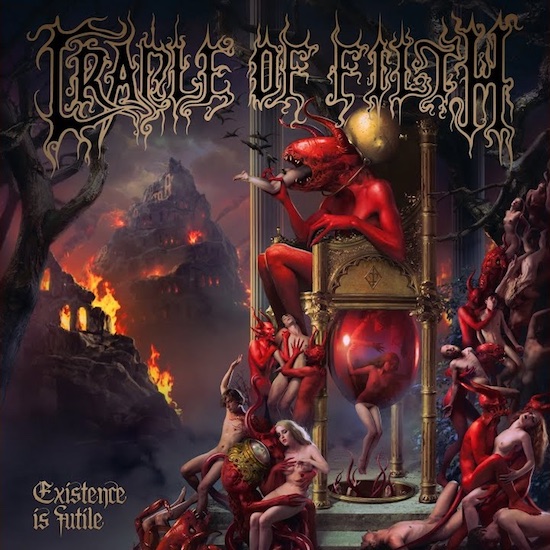 Type: Full-Length
Release Date: October 22nd, 2021
Label: Nuclear Blast
Genre: Black, Gothic, Symphonic
1 The Fate Of The World On Our Shoulders
2 Existential Terror
3 Necromantic Fantasies
4 Crawling King Chaos
5 Here Comes A Candle... (Infernal Lullaby)
6 Black Smoke Curling From The Lips Of War
7 Discourse Between A Man And His Soul
8 The Dying Of The Embers
9 Ashen Mortality
10 How Many Tears To Nurture A Rose?
11 Suffer Our Dominion
12 Us, Dark, Invincible
13 Sisters Of The Mist
14 Unleash The Hellion
MetalBite on YouTube

Cradle Of Filth are back on track, releasing their third album in a row which is quite convincible. I never thought that this would happen again after the very mediocre releases in the mid-00s and beginning of 2010 but with Hammer Of Witches (2015) and Cryptoriana… (2017) they already showed that they didn´t forget how to write well-arranged, epic and bombastic songs.

Now we have their latest output Existence Is Futile which shows the typical trademarks the Brits also used to have on their previous albums. The listener can find very symphonic keyboard arrangements combined with fast, thriving guitar riffs and pounding drums giving intense speed to the tracks. The album was produced by Scott Atkins who was also responsible for the last four COF albums before, and I would say that he made a very powerful and vivid production. The quite nightmarish Hieronymus Bosch-esque artwork was created by Arthur Berzinsh who also did the fantastic artworks for the previous two albums. Again, he did a fantastic job with this and I guess this artwork is a good reason to get the release as an LP.

What is in my opinion quite new in the compositions is that Cradle Of Filth are somewhat going back into their own past (very long ago) using death and thrash metal elements (maybe the one or the other remembers that they originally started as a death metal band which was heavily influenced by Deicide back in 1992 on their first demos) like in 'Existential Terror' or 'Crawling King Chaos' combined with some dissonant parts in 'The Dying Of The Embers'. Especially this track has a wide range of stylistic devices not only using dissonant sounds but also highly melodic, almost theatrical keyboard arrangements and very catchy riffs which takes the listener on a very varied trip. 'Black Smoke Curling From The Lips' is another great track with very gripping riffs and aggressive leads. 'Discourse Between A Man And His Soul' and 'How Many Tears To Nurture A Rose?' are two very balladic tracks which decrease the tempo of the album and gives the listener the possibility to relax a bit. In these two tracks you can clearly find some Iron Maiden influences in the guitar works, especially when it comes to the galloping riff in 'How Many Tears To Nurture A Rose?'. Both tracks stand out through the very melodic arrangements and keyboards, and it is nice to see that the keyboards don´t get too much space in them but are balanced between the other instruments very well.

One of the stand-out tracks is 'Suffer Our Dominion' which uses some keyboard sounds and spoken words as introduction. The spoken part was done by Doug Bradley (some may know from his role as “Pinhead” in Hellraiser) who also took part in one of the two bonus tracks you can find on the digipak version. I think this track is one of the most serious tracks the band has ever written because it deals with real topics, namely the destruction of the Earth and the results coming along with this. After the introduction the track increases speed, as if to show a musical image what will happen with all the things, we're doing to our planet. What comes to my mind listening to Danis vocals is that he doesn´t use such high-pitched screams as in the past though his voice still sounds very aggressive and powerful. The female vocal arrangements are done by the new COF member Anabelle Iratni who also participated in Danis side-project Devilment. She quite often reminds me of Sarah Jezebel Deva back in 1998 singing on "Nexus Polaris” by Covenant (especially these ahahaaa-parts) which isn´t too bad in my opinion.

Just let get me to the lyrics quickly – where the focus in the past was more on fictional (horror) stories, Cradle Of Filth deal this time more with philosophical topics such as existentialism (like in 'Existential Terror' or 'Us, Dark, Invincible') and real existing dreads like the destruction of the Earth. I think this is quite an interesting fact and worth checking the lyrics and not only the music. The title of the album – Existence Is Futile shall also show that we should live up every second of our life. Or as Death Angel once said: “Death is certain – Life is not”.

If you consider purchasing the album, you should get the digipak because the two already mentioned bonus tracks are also worth listening to. My opinion about Existence Is Futile is that Cradle Of Filth wrote a very intense, aggressive and thrilling album which I like even more than its predecessors.