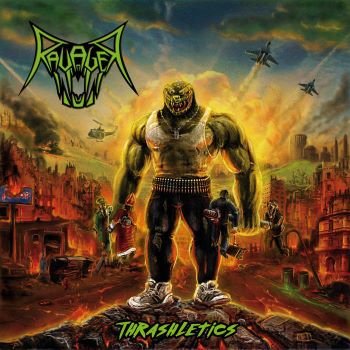 In the German metal press, there are some voices that have nothing better to do than to lecture the readers day in and day out about the thrash metal revival. Then I learn with growing astonishment that the majority of the current thrashers are only epigones who revive the classics of the old heroes in minimally varied form without their own performance. A few pages further, the new record of some traditionally oriented heavy or power metal formation is celebrated. They are certainly more innovative than the protagonists of the new thrash wave...

Kiss my ass. Of course, there are pronounced differences in quality in the current scene, but where do they not exist? In any case, Ravager are among the really strong representatives of the younger generation. Admittedly, the artwork is again an insult to every person who puts a minimal artistic demand on a painting. But also, here applies kiss my ass. Because the music, which bursts out of the boxes after the tension-building, good intro, has everything that an album of this style needs. In case anyone doesn't know the ingredients for a tasty thrash menu yet, here they come again for the taking. Already 'Mindblender' exudes straightforward enthusiasm and just the right amount of musical force, energy and cutting guitars. Here, once again, the seeds of Exodus and their peers are planted, as evidenced not only by the destructive chorus. The following title track underlines the good start. I like black thrash, but the pure form of the style that characterized albums like "Forbidden Evil" or "Eternal Nightmare" has of course the charm of the original. Ravager indulge in the purity of the genre and deliver a typical (and therefore wonderful) thrash release.

Ravager find to a great extent a very stable balance between attack and melody. The entire first half of the album impresses with compositional class, exciting song patterns and - of course - the carefree, tremendous power with which a thrash record stands and falls. At the beginning of the second half, the Germans then venture into an almost nine-minute number. That is a difficult undertaking in thrash. Exodus were successful with "Like Father, Like Son" (also at the beginning of the B side), but there are counterexamples that show that a crisp, short playing time can be the better choice for the genre represented here. Ravager don't do anything wrong with 'Slaughter Of Innocents', but a tightening to 6 - 7 minutes wouldn't have hurt the track either. By the way, the content is about My Lai. There the US Army did a very thorough job on March 16, 1968, but afterwards they didn't want to remember it, as you can hear in the intro to the song. A phenomenon that was also widespread in Germany after 1945. These military men... one can only marvel.

After the epic Vietnam Song, the band can't quite match the class of the first tracks. Nevertheless, the guys clearly do more right than wrong, and the excellent production brings the scratchy guitars as well as the slightly hysterical, but never shrill organ of the singer excellently to its advantage. With 'Kill For Nothing' the band manages to hit one last bull's eye, even if the speed is unfortunately slowed down a bit in the chorus. On the other hand, the guitars drill holes into the nerves of anyone who doesn't like this sound - and that is definitely praiseworthy. Therefore, in conclusion, a nice greeting to parts of the guys who write for the metal magazines: stop feasting on some bullshit or kiss my ass (again, I'm sorry) and find another job. You won't discover a more honest, energetic and powerful form of metal than thrash.