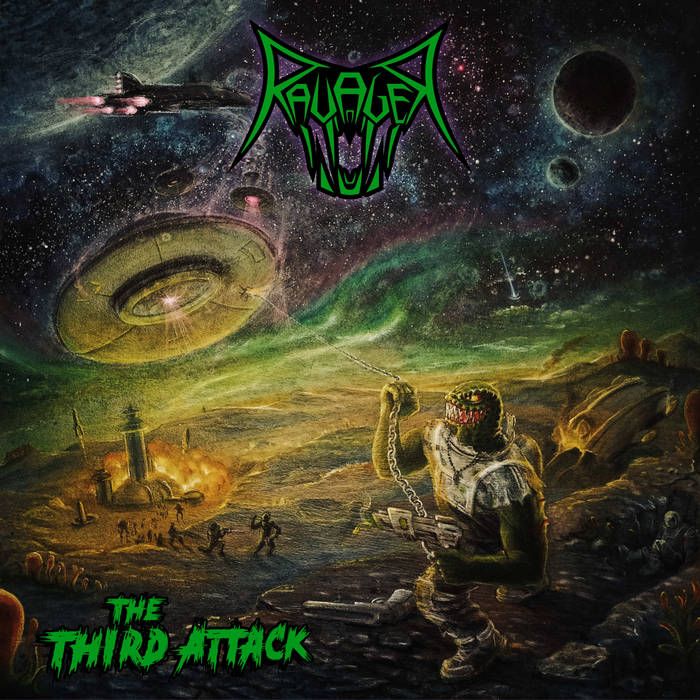 I've read about a conspiracy theory lately which I guess, even the former Orange Emperor and his followers would not mean seriously. It's about birds that aren't birds but some drones which trace people with their feces that they poop on their cars. You may be asking yourself where they get the energy supply from – well, also for that these theorists have an easy explanation: where do birds, eh drones often sit on? Correct, on power lines! There they do charge themselves. Now you may ask the justified question why I tell you all this bullshit – well, Ravager originate in Walsrode, a nice little town in Lower-Saxony, Germany where also a huge bird park is (or is it the German Area 51?).

But focusing on the music, I have to say that I didn't knew them until I stumbled over this output on YouTube. I was instantly very impressed so that I needed to get The Third Attack on my own. To mention some tracks as example, the guys start with an intro that appears to be quite interesting and normally I am not the biggest fan of these. ‘Planet Hate’ is a song that hits you in your face, very diverse with a lot of breaks, catchy and very Bay Area-influenced. Singer Phillip sounds like a mixture of Schmier and Mille and underlines the aggressiveness of the track with his performance. ‘Back In The Real World’ has some melodic, anthemic parts in the chorus and bridge part and could be a real live killer song. The following track starts with a little Slayer homage (the spoken part and the opening riff) and is a neck-breaking song. High speed with relentless aggression par excellence is the term that would match best here. ‘A Plague Is Born’ is a very groovy mid-paced thrasher which somewhat reminds me of new Onslaught releases mixed with some Exodus-like riffs. The title track is a fast riff attack in the style of Destruction and is the shortest track on the album. The other songs on the album are kept in the same style as the already described tracks. Some are faster, some are catchier and more melodic. Nevertheless, I have to mention the last track ‘Destroyer’. No, it's not a Kiss cover but a track where the four guys show all their technical skills. It's a very melodic track with some Iron Maiden and Judas Priest influences but still very thrashy and brutal. I'd say it's a brilliant ending for this album.

Lyrically the songs deal with madness (‘My Worst Enemy’, ‘Beyond Reality’), society’s problems (‘Planet Hate’) and you can see without any doubt that this album was written during the Corona pandemic (‘A Plague Is Born’). Looking at the very interesting cover, I had expected some lyrics about aliens or such things, but I guess, they are hard to find here (maybe the title track). Nevertheless, they are quite interesting, and you can see that they carry some agenda with them.

The last point I'd like to talk about is the production. It is very powerfully done and (at least in my ears) without any flaws. But this is to be expected when you produce your album in the Soundlodge Studio by Jörg Uken. If you are familiar with his own band Temple Of Dread and all the other stuff he did, you know what I'm talking about. Great job, great album!

If you like old school thrash, you should definitely check out these guys from Germany. As far as the year has proceeded, I would say that this is one of the two best thrash metal albums made in Germany in 2021 so far (the other one is “Give Us Life” by Space Chaser). That's it, now I have to wash my bike, a drone pooped on it. Not that I get tracked by this for whomever. Maybe it's the alien on the cover, this would explain quite a lot!!!!