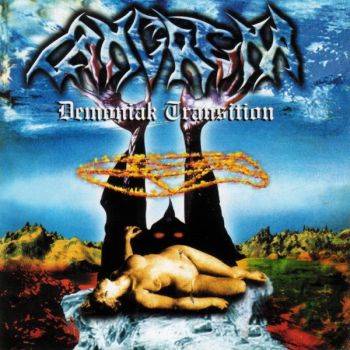 Because American Line Productions is the label that brought the world less than subtle acts such as Kabak, Disgorge and Domain, I immediately thought that Cangrena would be a band of the same mold, but (in part) because of the production they have going on this album, there isn't a whole lot of resemblance. Let me tell you all about it.

Cangrena plays death/grind alright, but in a way more old school style than the remorseless brutality their label mates have on offer. In a big part this is because of the rather peculiar production on this album. The kinda muffled sound mix reminded me of the first albums of South American bands such as Sepultura, Psychic Possessor and Sarcofago, with the latter being pretty similar in style to Cangrena as well. Frantic blast beats and aggressively tremolo picked riffing fight it out with gargling down-pitched vocals, immediately bringing to mind what bands such as Sextrash, Holocausto and the already mentioned Sarcofago did on their debut releases. The riffing has a Possessed edge to it as well, upping the old school factor even more, but the influence of the 80's output of Carcass and Napalm Death should be mentioned as well. At times I even hear a faint crossover thrash influence (think Cryptic Slaughter or even Righteous Pigs) in the riffing as well. The music sounds awfully familiar throughout the whole album, and if someone would have told me that this was a lost South American death metal album from 1988, I would have readily believed them.

As mentioned before, the production sounds pretty odd here. Even by 1999 standards this sounds hopelessly dated, with its dry sounding drums, thin guitars and effect vocals, but lo and behold, it works for them! Yes, it does sound dated as hell, but at the same time it (unintentionally?) gives the music an old school vibe that a lot of throwback bands nowadays would kill for. I certainly dig this cd a lot, despite the peculiar production and the mistakes the band makes throughout the album's runtime. It all makes this album ooze a certain underground charm, and that is something that I am particularly susceptible for.

This is not a release that I'd say is recommended or a must-hear, but I would say that this is an interesting oddity for sure, a kind of insider tip for all who are into old school death metal or 80's South American thrash/death metal for sure. It won't fill some kind of gaping hole in your collection, but if you find it for cheap (or download it), it sure is an enjoyable rarity worthy of your time.