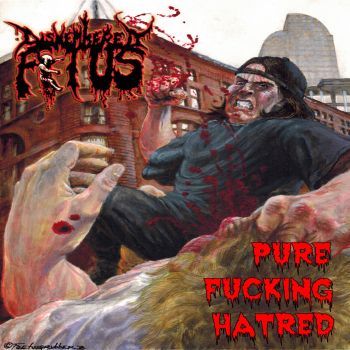 So with that out of the way, let's talk about the music that is worth the mention. As stated, these tracks carry within them the influence of fellow grind units as the ones mentioned above, but troublemakers such as Drogheda and Nausea (LA) aren't far off either. It's not all grindcore madness though, in the alternating different vocal styles and some of the riffing the band uses I hear the influence of Disrupt and Extreme Noise Terror, giving the music a decidedly crusty edge. The band is at their best when the blastbeats go head-to-head with the frantic riffing and the growled and screamed vocals, but at times the band let go of the accelerator entirely. In these parts Dismembered Fetus forsake the raging grindcore they primarily belt out, to turn into a crawling sludge outfit. These moments have me thinking of what acts like Grief or Eyehategod turn out, and they work well among the high speed ferocity, providing some breathing space here and there. Most welcome on a 50-minute album that scores high in the intensity stakes.

While a lot of the music on here is worth the time, there is also quite some things that annoy me. Not only the noise grind tracks stated above, but there is also a lot of movie samples present, something that seldom adds anything of value in my opinion. Probably the biggest gripe I have on here is the unbalanced sound mix. The vocals and snare drum are way up front, while the guitars are pushed in the back, which makes the music as a whole sound messy and unfocused. Don't get me wrong, I can certainly appreciate an underground production, but here it diminishes the overall performance. Add to this that the band isn't always that tight in their execution, and you'll understand that it can become chaotic at times. The bad kind of chaotic.

To conclude, even if the production leaves some to be desired and not everything the band churns out is worth the attention, this album is still a pretty good (and raucous!) overview of what was on offer in the extreme hardcore underground of the early to mid-90's. Still, it has to be said that this album probably will not have a lot of merit for those outside of grind, crust or power violence circles.