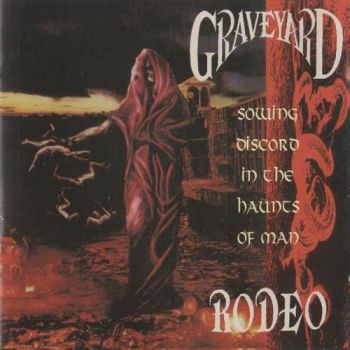 This lot is quite the remarkable band. I got to know them through their On The Verge album, an effort in the vein of Pantera that had its moments, but no more than that. Their debut is an entirely different bag though. This is by far one of the most interesting releases I have ever heard. There's much going on here and it is really hard to pin them to one particular style, but instead of turning into a forced hodge-podge of different influences, it all blends together admirably without losing focus. Curious? No? Well, fuck you, I'm going to start yapping anyway.

The first handful of tracks have a heavy influence of old school hardcore punk, with names like Negative Approach, Siege and Discharge all coming to mind, best exemplified in a track like 'Behind Enemy Lines'. In other songs there's the NYHC sound of bands such as Dmize, Neglect and "One Voice" era Agnostic Front present, but to describe them as just a hardcore band would not do the band justice. The riffing and guitar sound have a definite Massacre "From Beyond" feel to them, maintaining a thrash/death metal feel throughout, while in a track like 'Internal Damage', the NYHC influences are combined with sludgy, doomed out metal in the vein of Saint Vitus, Black Sabbath and the slower material of a band like Carnivore, a trait they share with many of their NOLA contemporaries. The band keeps it varied throughout the whole of the album, interspersing faster parts with slower sections. On the second half of the album the faster hardcore punk influence becomes a little less outspoken, without completely disappearing though. This sees the band delving more into doomier Black Sabbath territory, while in 'Cell XIII' the band tries their collective hand at old school death metal. In 'The Truth Is In The Gas Chamber' they combine the cranky hardcore style of Sheer Terror with a burst of crossover thrash in the best D.R.I. and early Crumbsuckers tradition, while 'Future Of The Carcass' gives us a glimpse of what a metallic version of "My War" era Black Flag would sound like, but with added haunting keyboards. As you probably understand by now, this band will surprise you at every turn their music takes yet does this without becoming forced or unbelievable.

You'd be forgiven to think that all this would sound like a directionless mess, yet the band manages to keep it all together without losing focus of the total picture. The gruff vocals of Perry McAuley as well as the crunchy guitar sound and imaginative riffing act as combining factors for all the different influences embedded within the band's music. Helped in big part by the well above average production, the pounding hardcore/metal hybrid stays on point during the entire album, with sporadic haunting melodies and gang vocals providing some well-placed hooks. Yet in all honesty, this album will require a few spins to totally get to the bottom of what the band has to offer, but it certainly is worth the effort. This is one of those awesome albums that get better the more you hear it, always discovering elements you haven't heard before.

It's not hard to imagine why this album kinda got lost between the cracks of time. It may combine elements from thrash metal, doom metal, hardcore punk and death metal, yet it isn't any of those genres in particular. On this album the band followed their own path, to impressive effect I will add, but at a time that black metal was about to take over from death metal, that had taken over from thrash metal years before that, this album was without chance.