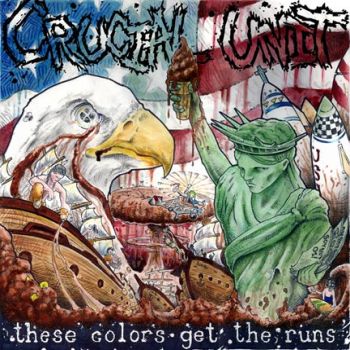 Six Weeks Records used to be among my favorite labels back in the day. Burning their name in my brain with releases by mostly stupid-fast hardcore punk bands like Charles Bronson, The Neighbors, Capitalist Casualties and Voorhees. So, when they released a full length by Crucial Unit, who I already knew from their split with Municipal Waste, you better reckon I was sitting straight up and paying attention.

If I'm going to be completely honest, I liked them better on the aforementioned split. The reason for this is that on this cd the songs got a bit longer (mind you, it's still not prog rock though) and they have incorporated more metal and hard rock into their sound, scaling down the demented thrashcore of before somewhat, which is a bit of a letdown for me. This kind of music needs to be high in the intensity stakes, without any unnecessary padding, and that is not the case here. At least not on the first part of the album, but later on more about that.

Before this release, you could compare them to acts like Attitude Adjustment, Infest (US), old D.R.I., Negative Gain and Septic Death. The usual characteristics such as the screamed vocals (alternated with hoarse barked vocals in the best powerviolence tradition), simple fast picked riffing underpinned by rapid polka beat percussion, poured into short energetic bursts of noise, it was all there. The band more or less holds on to this formula on this album (tracks 1 to 12 at least), but expanded on it with some more subdued parts, creating some longer songs in the process. Take 'Crucial United Forces', where the band nods at a more punk metal style, having me think more of bands like Inepsy or Toxic Holocaust, but they even go as far as injecting a hefty dose of Iron Maiden/Judas Priest styled guitar melodies throughout. Musically, it's not that bad, but I want to hear Crucial Unit just flying of the handle with raging, bat-shit crazy thrashing hardcore hysterics, and that's not what I get from this stuff unfortunately. It had me thinking more of Sum 41 who drank too much coffee. Hell, I heard them even deliver a not-so-subtle nod to Quiet Riot somewhere in there. Yeah, thanks but no thanks on that one. What I did appreciate on the first half of the album is the track 'Crucial Unit's Friendship Picnic', that one gave me a good Dayglo Abortions vibe, and some old school hardcore punk vibes to boot.

From track 12 on, we get (on the cd) the songs from the split with Municipal Waste, and these I like better, because here we get the band in all their unhinged glory. Fast raging punk thrash, with a lot of blasting drums and a total lack of nuance. Short songs, barely held together by the insane screams of singer Justin, its hardcore heaven, this is. It's these songs that save the album in my opinion, even if they are old recordings. That, and the hilarious song titles, of course.

Even if the music isn't bad, it left me with a light feeling of disappointment, making me miss their old bonkers sound. Still, I think the party thrash crowd will be able to appreciate it better than I do, probably. It's not a horrible album in any way, and with the whole "let's get back to the 80's" vibe going on in metal right now, it deserves to be heard.