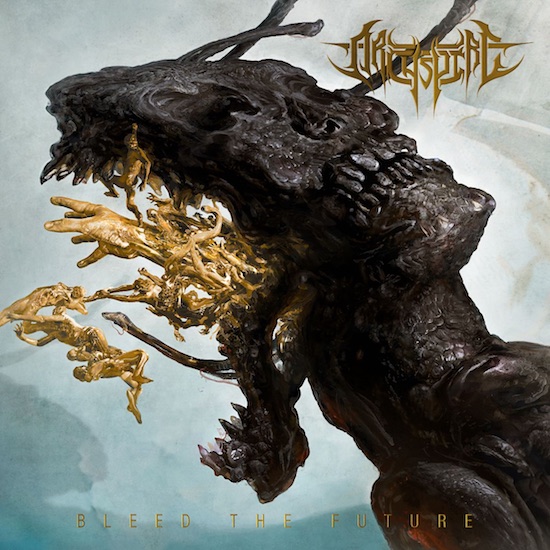 I feel bad for anything else that had to compete with this for Album of the Month. First Fragment stepped their game up in every aspect and came out with an incredible album in their own right, making a desperate bid for "craziest tech death release of the year" with all sorts of neoclassical fretboard mastery, even more jam-packed songwriting, and even dialing up their swing music gimmick. Great stuff...it's still leagues behind this. I also don't want to understate how much I liked the Crystal Coffin album I just talked about above. Again, though, despite a valiant effort in crafting a signature sound with some excellent execution, there's still no comparison. Neither album can top this. Nothing can. I've only just heard the album in full for the first time and I know for a fact it's different. I had sky high expectations for this and this lovely group of B.C. boys fucking shattered them with ease.

I've been listening to the three premiere songs on repeat (title track, 'Golden Mouth Of Ruin', 'Drone Corpse Aviator') and that's all I need to know that Archspire somehow got even fucking FASTER. That they have somehow gotten even more tech when their previous release, Relentless Mutation already unlocked a new skill and speed tier that literally no one had gotten to before that point is just...wow. They already clearly held the tech crown, now they're at least three steps ahead of any other band in the genre - and I say this as a HUGE fan of anything techy, which you would know if you're familiar with these lists. Bleed The Future is like taking LeBron James in his prime and having him compete against high school basketball teams. It doesn't even feel fair.

The secret sauce that makes their mind-boggling musicianship and dexterity listenable is the songwriting. It took a couple albums to figure it out, but once they realized that you can write repeating verses and hummable choruses without sacrificing the chaos, they took it to the next level. You want your audience to actually remember what they heard, even if it is supposed to scramble your brain at terminal velocity. Interestingly enough, Bleed The Future leans a bit more on the linear songwriting of The Lucid Collective - it's more linear and less chorus-focused than Relentless Mutation was, but that serves no detriment at all because there's still several moments on every song that make your head snap to attention while you say "how the fuck do they do that", and you'll just remember those instead. Whether it's that little machine gun strat-stop thing Spencer does, the impeccably smooth death chopping, a disgustingly fast tapping bass line or just a feelsy little guitar lick, something will grab you and take hold. Or a couple things. Or everything at once.

Archspire was already unquestionably the fastest and most skilled band in death metal, and they decided that wasn't enough and needed to one-up themselves. Spencer put even more of a gap between himself and the second place guy (which is like, iunno, John Longstreth or the guy from Viscera Infest or something). There's a part on this album that is fucking 400 BPM!!! If his drums get any faster they'll just be an indiscernible buzzing noise. As is now an expectation with Prewett's work, though, there's a ton of groove and feeling in the inhuman speeds - his drum style is distinct to the point where you can now identify it mere seconds into any song. In addition, though I'm foaming at the mouth over the sheer volume of notes and drum hits Archspire can pack into a single verse, these songs (most notably 'Golden Mouth Of Ruin') lean into the underrated brutal death metal influences and bring a bit of the big ol' chonk to balance out the lightspeed obliteration.

I can't even find a comparable for vocals. The choppy delivery of guys like Corpsegrinder or Dennis Rondum isn't even in the same ballpark as Oli's tape- on-fast-forward style. The penultimate death chopper already set the bar higher than anyone would be able to clear with Relentless Mutation and no one cleared that bar in four years, and then he doubled down on his techniques. Some think his style is too much, another layer of maximalism in music that absolutely did not require it. I'm more of the opinion that this was what harsh vocals were always meant to do.

Vocals were always notoriously the least technical part of even the fastest and most sweep-happy tech-death metal bands. I remember one comment on a YouTube video for an Origin song ('Finite' I think it was) that stated "Origin is three gods and a vocalist" and it had a bunch of likes. It's just common knowledge that the guy growling is far and away the least talented member of the bunch, but now that claim can no longer be made. Everything about Oli's vocal performance - his speed, diction, lyric choices, enunciation, his flow (yes, a death metal vocalist has flow) - is intricately composed with microscopic attention to detail and performed with an inhuman lung capacity and hundreds of hours of practice. On Bleed The Future he takes the parts that make you go "holy fucking wow" on Relentless Mutation and makes them longer, faster, more twisted in their phrasing, sharper, and catchier.

Good musicians play the game, great musicians pace the game, but legends change the game. In that sense, Oli is the Steph Curry of tech death. I don't like to mention my own musical pursuits in my reviews (it's self indulgent and not to mention irrelevant most of the time) but this is the one exception I make since Oli has become my biggest vocal influence in the past few years. I have his instructional video (highly recommended), I watch everything the guy puts on the internet from his cooking show to his up-close and personal #chewcam videos on Instagram, and in my own tech-death band (it's not out yet, don't bother trying to look for it) I'm constantly looking for new ways to rip him off or even replicate a small modicum of what makes his vocals special. You might say I think he's pretty good.

I'm definitely letting my fanboy colors show here, but I'm not exaggerating - Archspire is my favorite active band, and I legitimately believe Oliver Aleron is the single most important pioneer for harsh vocals we've had yet. Relentless Mutation was my album of the year in 2017 when it came out, because it amended every beef I could have possibly had with The Lucid Collective - mostly the unmemorable, scattershot songwriting. There was a period of six months where I listened to that album and that album only. After catching them on the Relentless Mutation tour, it became evident to me just how far ahead of the game this B.C.-based group is. They were fucking perfect live and nailed every single line, drum hit and solo. I could look at any individual musician at any point during the set and go "holy shit look at the crazy shit that dude is doing". I can't even imagine how Bleed The Future is going to sound live. I'm so fucking excited to hear it.

Look, you're on a metal webzine and probably check out new music regularly, you know this is good, but I hope that my incessant fanboy ranting lets you know just how good this is, and how significant of a contribution this is to the technical death metal genre as a whole. When it comes to your album of the year, you don't look at the ratings and compare and contrast different releases - you just know. And with Bleed The Future, I knew.