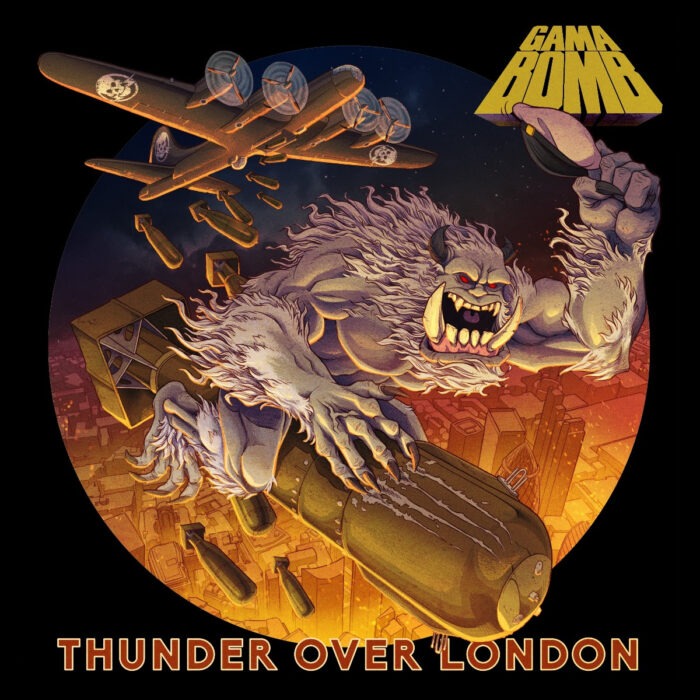 As far as I can judge, Dublin is a busy, pulsating city and thus it is just logical that Gama Bomb also do not need much sleep. Okay, Thunder Over London presents only one brand new piece, the title track. But one is better than none and frankly speaking, I also did not know the two further tracks so far - shame on me. So let’s analyze the (almost) twelve minutes of gamabombinable music.

As always, the permanently loony dudes celebrate pure doom that triggers depression, frustration and suicidal thoughts… okay, bad joke. True is that Thunder Over London is filled with typical Gama Bomb stuff. All trademarks of the band show up: dynamic guitars, high speed rhythms, the high-pitched screams of Philly Byrne and an overdose of energy. The technical skills guarantee precise sounds, while the transparent and powerful production lends the songs the right frame. Maybe there are some differences between the different tracks in terms of the sound due to different recording sessions, but they can be neglected. On the other hand, it is pretty annoying that Thunder… seems to be a digital-only release. Shitty format, or better: no format at all.

The newest track is straight, impulsive and delivers a good chorus, but its best part begins as soon as the intensive high velocity bridge sets in. The staccato gang shouts and Philly’s smooth lead vocals are a nice contrast and the outstanding guitar line of the bridge makes my pulse run faster. By the way, Gama Bomb don’t play the funny clown here. The lyrics deal with a serious topic and prophesy a bleak future for London, Paris and Berlin (but at least the German capital is used to be destroyed from time to time, so don’t worry). The further songs, 'Reveal The Shrieking Skull' as well as 'Shut Up And Shout', are far from typical outtakes (sorry: bonus tracks). Maybe they do not get a place on your personal Gama Bomb best of, but that is rather due to the meanwhile already very rich discography of the Irish sirens. As said before, they are very busy – and they always do a good job.