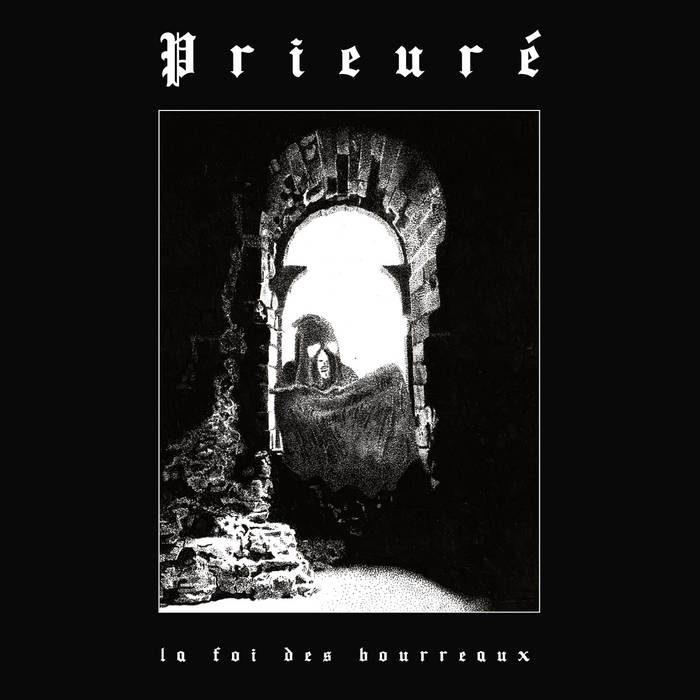 A slight punky riff opens the new Prieuré release La Foi Des Bourreaux and after some seconds the unholy mayhem breaks loose with a bone-shattering scream performed by Sans-Visage. He is the head behind this French project (also performs guitar, bass, drumming and takes care of the layout) and he is also involved in the bands Vipère and Vielle Chévre so he is obviously a quite busy man.

The music is heavily inspired by bands like Ad Hominem or Mysticum, so one can say it is somewhat industrial black metal. The first track 'La Foi De Bourreaux' is characterized by a quite hectic and a little bit chaotic riffing at the start which turns into a catchy track with quite melodic riffs and a desperate chant. The chaotic structures shine through and make the track a little bit incalculable. 'Le Feu' is a mid-paced track with hypnotic drumming which is the strong point of the track. I get the feeling that all the arrangements were built up around the drumming, even though it is little bit disturbing and dissonant. Everyone who likes Deathspell Omega and that style of black metal may be used to it. The third (and shortest track with a running time of 1:46) is a very fast-paced track with hateful vocals and chopping drums. Sometimes some melodic riffs are played so that the track don't get too monotonous. This track really reminds me of the old Mysticum release (does anybody remember “In The Streams Of The Inferno”?). 'La Sombre Beauté Des âmes Pertubées (Reprise De Vielle Chèvre)' is a very aggressive song, too. The vocals are very harsh, and the sawing of the guitars are to the point of hurting in your ears. The final riff is the topping of that very challenging song. But if you have survived this inferno, you get a great acoustic guitar outro (with some references to a classical track) which shows that Sans-Visage really masters his instruments.

I hope you didn't get me all wrong because I didn't want to say that the release is bad in any way, it's just challenging. This is something that should be (often) a part of black metal and it is what happened here. Apart from this, the illustrations on the CD are quite interesting and really worth taking a closer look. If you like your daily dose of black metal not mashed and weak but rather raw and bloody, you should definitely check Prieuré!!