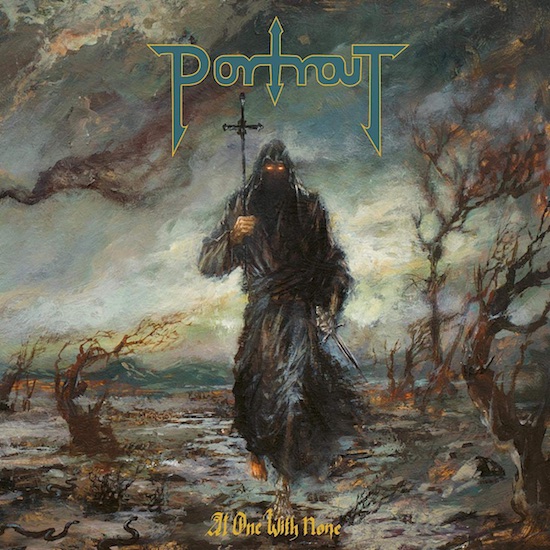 Type: Full-Length
Release Date: September 3rd, 2021
Label: Metal Blade Records
Genre: Heavy
1 At One With None
2 Curtains (The Dumb Supper)
3 Phantom Fathomer
4 He Who Stands
5 Ashen
6 A Murder Of Crows
7 Shadowless
8 The Gallow's Crossing
MetalBite on YouTube
MetalBite on YouTube

It was September 3, 2021 when an institution of metal was pushed back into the spotlight with force thanks to the release of a new album. A band that embodies pure metal like no other and that has been releasing exclusively good to very good albums for a long time. A band that thinks about the totality of an album, which is expressed not least in fantastic artwork. A band that is known for its galloping rhythms, but also for its variability. We are talking about Portrait, of course. Or did some iron maiden think I was speaking about someone else?

The fifth full-length of the Swedes is as challenging as its predecessors, but it is also as rewarding as the four previously released monuments. The compositions still reveal a profound depth. Indeed, traditional metal does not have to be flat. This is especially true when a good dynamic is achieved through clever tempo changes, when a certain mysticism finds its expression not only in the artwork but also in atmospheric choruses ('He Who Stands') and when a strong singer, who masters even the highest notes with ease, duels powerfully and charismatically with the excellently produced instrumental fraction. Moreover, it is noteworthy that the Swedish shock troop follows its very own tactics. Of course, there are echoes of the early Mercyful Fate but neither musically nor regarding the vocals it is a copy, nowhere near! And Portrait is also separated from In Solitude by more than just their clearly better pronounced stamina. Rather, it seems to me that Portrait, with their mixture of natural toughness and their weakness for the occult, could increasingly become trendsetters themselves. The main thing is that they don't give in to gothic sounds - but at least At One With None doesn't show any sign of that. That's one of the best features of the album: although soulful sections do appear, it never becomes cheesy or superficial. Portrait manages (and this is what makes them stand out from the mass of bands) to reconcile seemingly incompatible things. Their lamenting moments still sound powerful, their despair is never delivered without pride and self-awareness. On the other hand, even in the hardest track (the outstanding 'A Murder Of Crows') they don't wallow in mere bludgeoning. The melodic note sometimes takes a back seat, but it never disappears into thin air.

My favorite song from Portrait is 'Burn The World', the actual opener from the 2017 album of the same name. It was (and still is) a larger-than-life introduction to that work. The wonderful parallel to At One With None is that this time, too, there's an almost overpowering title track at the top of the list. The opener thrills after a quiet intro with birdsong and acoustic guitar with an all-flat rolling mid-tempo part where the guitars roll out a steely carpet. The first shiver already runs down my spine, but Portrait increase the intensity once again when a melodic, melancholy guitar joins in, which gives the piece breadth and depth at the same time. Finally, the voice of Per Lengstedt - a gift from the Metal God. Clear, natural, accurate, charismatic, seemingly spanning all octaves, always serving the song and never strutting around as an end in itself. I can't praise the perfect verses of this track enough, so I'm almost glad that there are marginally less strong parts in this track as well. But to be clear, this is an absolutely brilliant introduction to the record, with melodic soloing, outstanding structure and tension from the first second to the last.

After the almost eight minutes of the first track have pushed the gate to the sound dimension of Portrait wide open, the other tracks follow almost on the same level. They, too, combine rebellious harshness with dignified grandeur. These contradictory components shake hands as if it were the most normal thing in the world. Portrait should patent their melodies - they are all so metal-compatible that there seems to be an extraordinary creative force behind them. Admittedly, the one or other almost ordinary harmony creeps in from time to time and not every single part of the carefully designed pieces reaches the highest consecrations. Nevertheless, the overall work is more than impressive. Even the above-mentioned iron maiden may rejoice, as she has left more traces in the sound of the Scandinavians than, for example, the Judas Priest, who never knew whether he wanted to break the law or fire up the turbo. But let's not worry about this fickle idiot, Portrait provide better topics.

Looking at the closer 'The Gallow's Crossing' for example, two things stand out positively. On one hand - it is a typical last piece. It bundles the strengths of the well-oiled unit for the last time, treats itself to a quiet intro and prepares for the calm after (!) the storm, which is much more pleasant to me than the calm before (!) the storm since Venom's filth from 1987. Great vocal lines, driving rhythms and metallic, classic solos give the listener provisions for the coming dry spell until the next album (in 2025?). On the other hand, and almost better - the closer is not the closer at all, haha! Okay, the bonus tracks can not keep the dizzying level of the main course, but a nice dessert it is in any case. Thereby 'Farewell To The Flesh' is the stronger of the two outsiders. The track sounds punchy, while 'The Blood Is The Life' exceptionally suffers from relatively stereotypical parts - but these appear even here only in small numbers. Thus, it is certain for me that September 3, 2021 will become a memorable day for the global metal community and especially its tradition-loving members. And it will not hurt the memory that some prosperous old gentlemen from Britain also released their new work exactly that day.